Christopher Nolan’s $165 million IMAX space lollapalooza is all the better for starting in the most modest of environments. 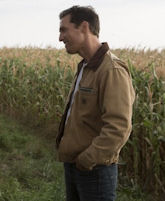 It is some time in the future, some place in the American Midwest. Things are not going well, according to the elderly respondents. Blights are decimating okra (a blessing to some) and closing in on corn which threatens the very core of mankind: the MacDonald’s shake. Crop diversity is decreasing and the remaining strains are at risk for even a weak-kneed virus.

Then there are the dust storms. We are not talking about cute little dust devils weaving down a country road. We are talking about the inside of a Dyson Powerball the size of the Rose Bowl set into a Grand Canyon of double-ought Arizona road grit. Dust so thick you can’t see the John Deer hood ornament on your combine, so thick it will fill up your house if you don’t get the windows closed quick enough and bury your International Harvester faster than you can say “Hoard of Locusts.” As the dust sandblasts the screen, Hans Zimmer’s pipe organ soundtrack builds up to the first of its many crescendos. This is serious.

As the old folks say at the beginning of the movie, “Who ever thought the dirt would turn on us?” Well, grandma, it definitely has, and someone has to do something. The organ music rises to another heart-thumping climax. The solution is clear.

As Nolan’s screenplay puts it (co-written with brother Jonathan), the earth is used up and we had better find a new rock to live on before the last corn crop is hit by the last blight and this ridiculous dust buries the catering truck. This is not a “save the earth” movie — we lost that fight and it is time to get out of Dodge. NASA, once disparaged, has been reborn in secret.

Ex-Marine pilot Cooper (Matthew McConaughey) has been recruited to accompany Dr. Amelia Brand (Anne Hathaway) on a “Star Wars” surplus spaceship to the Promised Land. Set the GPS to the wormhole just south of Kansas City, turn right into the black hole, floor it out the other side and stop when you get to virgin soil. Build a parking lot and start over.

For those viewers who are blessedly unfamiliar with the theory of General Relativity (no, it is not Colonel Sander’s shift supervisor), a wormhole is a shortcut through space-time that lets you travel a jillion miles in less time than it takes to smoke an average reefer. The only problem is that there may be a black hole on the other side, in which case you will age at a fraction of the speed of those you left behind. 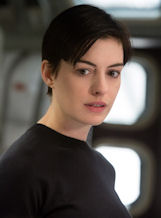 Before you college freshmen think you could run through one, have a beer, and be back in time for graduation, it is not that simple. There are excruciatingly bright lights, LED filled mirror chambers, monstrous tidal waves and frozen ice clouds to deal with. Not to mention mad scientists here and there. Plus, there is no time to lose, because in the nearly three hours it takes to screen this extravaganza, the folks back home have aged ninety years and the only earthlings left alive are in Carlsbad Caverns eating barbequed bat.

Make no mistake, all this death and destruction makes a great platform for outstanding special effects, especially when viewed in 70mm IMAX. The savvy viewer will not spend a lot of time trying to figure out the physic-babble, which is just as well (check it out on Wikipedia, the wormhole version of Einstein).

A great performance by Matthew McConaughey is made easier by a screenplay that does not require him to spout physic-babble. He just has to speak the simple Mid-western truth, which is that we are who we say we are, we have always figured out a way through adversity and we always will and we are capable of talking to ourselves across space-time. In fact, we are even capable of arguing with ourselves across space-time, but we usually lose the arguments. Organ volume up for the fourteenth and loudest crescendo. Thankfully, Cooper mostly flies the spaceship.

Jessica Chastain plays grown-up Murph, Cooper’s genius daughter who figures out the real truth about the so-called called relativistic, space-time, micro-pulse quasar LED android equations of neo-Einstein Dr. Brand (Michael Caine—still a stud even in a wheelchair). But when it comes to Murph, Mackenzie Foy does the heavy lifting as Cooper’s 10-year-old daughter, whose temper tantrums rival the dust storms.

Great supporting performances by David Gyasi as crew member Romilly who ages 23 years during Cooper and Amelia’s 20-minute trip to the black hole and Matt Damon as charismatic Dr. Mann. Oscar nominations are expected for TARS, the coolest robot since R2D2 and the master of chilled out understatement (voiced by Bill Irwin). Be there or be, well, somewhere. 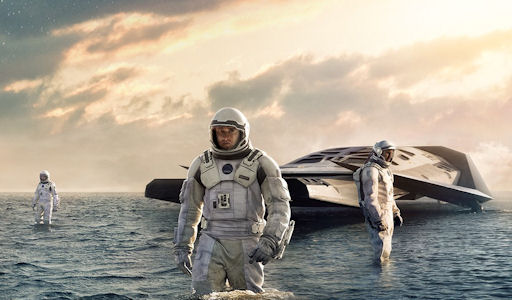