Most films made in New York City are eclipsed by the city. The film maker hopes to use the energy and glamor to make a mediocre film great. Instead, the city steals the show from the screenplay and usually the actors as well. Perhaps NYC knows this when provide such ready access to Gotham for film crews. 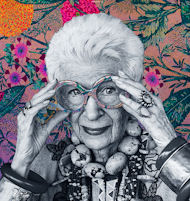 Films that manage to match what the city has to offer are few and far between but exceedingly fun to watch. The film “Iris” not only matches the brilliant, goofy, maddening eccentricity, but its subject defines the city. She is not just in Gotham, she is part of what makes Gotham.

Known for clothing styles and accessories that go beyond the flamboyant and excessive into the realm of the unbelievable, Iris combines unbridled creativity with indestructible honesty. She is as candid and open at age ninety-three as she has been her entire life. Don’t dress smart? “it’s better to be happy than to dress well,” says America’s reigning fashion maven.

As one would expect, behind Iris is a work ethic that would kill a Clydesdale. The film includes fascinating clips from her time as an adviser to the Kennedy White House, when she acted as a consultant in restoring and changing rare fabrics. Prior to this she and her husband Carl founded their own textile manufacturing firm, making fabrics that could not be found anywhere and not a few of which could be understood by anyone, either.

The film includes a tour through her storage space as well through her apartment. She has devoted a lifetime to buying things from every continent and they exhibit a variety and unabashed enthusiasm that comes from the heart. Her childhood in middle-class Astoria, Queens during the depression gave her street smarts that resonate through every scene of this movie. “I’m not beautiful, and I’m glad. If you are beautiful you learn to depend on it and when it’s gone, poof! When you learn things you have something that will last.”

Filmmaker Albert Maysles has credits for cinematography and/or direction for approximately 75 films. He is Oscar nominated and appears to enjoy his work almost as much as iris, and that is saying something. As he interviews Iris taking part in her international exhibit tour which started at NYC’s Metropolitan Museum he is having every bit as much as she is. They are both “geriatric stars.”

This film is a first rate documentary that tells it like it is, with no extraneous agenda related to fame or fortune. Everybody involved has been there and done that. As Iris says, “We have bigger fish to fry.” When asked what those bigger fish might be, her muted response is the health and longevity of ourselves, and, perhaps implied, those we love.

Unbridled enthusiasm is not only fun, it leads to unbridled genius. Iris never considered herself a genius, but she knows how to have fun. See this doc and have some fun, too. 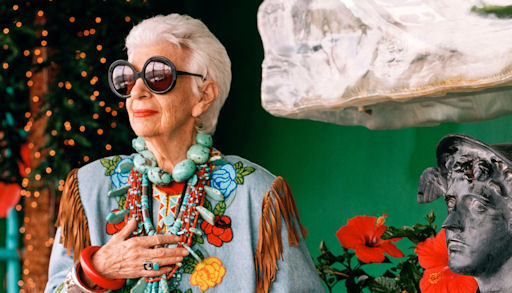