Just as Marvel’s “The Avengers” was the culmination of a long and very thought-out process in Marvel’s Phase One, “Iron Man 3” is the effort of a lot of hard work over the past six or seven years, starting with the casting of Robert Downey Jr. as Tony Stark.

Director Jon Favreau launched the Marvel Cinematic Universe into orbit with the hit “Iron Man” in 2008, and while many of us might not be the biggest fans of the 2010 sequel, it played a part in moving Tony Stark forward as well as developing many of the vital relationships in this film. “Iron Man 3” is the cherry on top of this trilogy and with Robert Downey Jr.’s contract with Marvel to play the iconic character now finished, we aren’t guaranteed to ever see him don the crimson and gold suit again.

With a new director, Shane Black, taking over the reins from Favreau, this movie feels different but still fits in sync with its predecessors and features Iron Man facing off against some of his most iconic villains, The Mandarin and Aldrich Killian, we are bound to see some of the most intense action sequences in the franchise yet.

So is Marvel planning “Iron Man 3” to be the end of Robert Downey Jr.’s trilogy of films or is there a plan to launch the franchise to new heights in Phase Two?

“Iron Man 3” is based loosely on the Extremis story arc created in 2005 by Warren Ellis with illustrations by Adi Granov. The movie takes place sometime after “The Avengers,” where a haunted Tony Stark (Robert Downey Jr.) has been incessantly building new suits of armor while also trying to perfect his new Mark 42 armor — an armor that he can call at will to assemble onto his body.

Stark clearly has been affected by the events in “The Avengers.” The startling realization that he is a very small fish in an intergalactic pond full of Aliens, Gods and other sentient beings has left him unable to sleep and at the mercy of the severe panic attacks. He is growing distant from his girlfriend, Pepper Potts (Gwyneth Paltrow), and doesn’t even notice that there is a new terrorist who calls himself The Mandarin (Ben Kingsley) setting off bombs throughout the United States. Luckily, his best friend Col. James Rhodes (Don Cheadle) is busy tracking down the psycho in his newly painted and rebranded armor, the Iron Patriot, which is being used to combat terrorism for the United States government.

We flash back to a party at New Years Eve 2009 where we meet a geeky scientist Dr. Aldrich Killian (Guy Pearce) whom Tony blows off to hook up with hot scientist Maya Hansen (Rebecca Hall). Flash forward to current day where Pepper Potts meets Aldrich when the newly-groomed scientist approaches her as CEO of Stark Industries to get involved with a new technology he has developed. The technology, called Extremis, is a techno-organic virus which completely rewrites the body’s genetic code, enabling supernatural healing abilities in the subject.

Seeing the implications for it to be turned into a super soldier weapon, Pepper declines any involvement in the further development of the virus. When The Mandarin strikes close to home and injures someone close to Tony, he goes on TV and invites the terrorist to go against him and gives his home address, which brings a fleet of artillery filled helicopters that destroy Tony’s mansion with him and Pepper inside.

Pepper escapes, but Tony is feared to be dead. Battle worn, he blacks out and awakens when he crash lands in Tennessee where his trusty A.I. Jarvis (Paul Bettany) has taken him based on a conversation previously about where the first bombing took place. With no working armor and no way to get home, he finds himself face to face with a young boy, Harley (Ty Simpkins), who is recruited to show Tony around town and take him to the site of the very first bombing where he discovers things might not be what they seem and there are enemy forces everywhere.

With so much at stake, Tony must rely not on his armor, but on his wits to save himself and those he loves. With two villainous enemies and their army of Extremis warriors, Tony is once again fighting to save himself, Pepper and many more. Secret plots abound as The Mandarin and Aldrich Killian work to unravel and destroy Tony’s world and the security of the American people.

“Iron Man 3” is entertaining and action packed, but director Shane Black works just as hard to keep Tony out of his armor as much as possible to offer a glorious final battle. Being the first Iron Man film to be fully produced and released under the Disney name, it does show signs of the humor and tone being in line with a more family-friendly film. That is odd to say, however, as this is the most violent of the trilogy to date, showcasing many more deaths than usual.

That being said, Black, who co-wrote the script along with Drew Pearce, has made the funniest Iron Man film yet, which says a lot as Tony Stark is known for his sarcastic and snarky quips. It has so much humor that the laughs almost outweigh the amazing action sequences. Black has clearly put his stamp on the film as it is filled with reverent quick witted dialogue and laugh-out-loud moments.

“Iron Man 3” has the freshest script to date. It is miles better than “Iron Man 2” and just about as good as the original “Iron Man,” in my opinion. Black has a hit on his hands and while some interesting choices for certain characters origins may not be what die-hard fans want, the general viewing public should love the movie.

The film is filled with plot twists, many double sided characters and multiple big reveals that keep the audience guessing and the movie feeling raw. Although you may have seen many of the cool sequences in one of the many trailers, director Shane Black has saved quite a bounty of shocks and surprises to still wow the viewer.

The ever-expanding cast is filled with some superb talent and our two villains, played by Guy Pearce and Ben Kingsley, do outstanding jobs with their roles. Other new additions in Rebecca Hall as Dr. Maya Hansen and extremis henchmen Stephanie Szostak and James Badge Dale make big impressions with the screen time they were given. As usual, the returning cast of Robert Downey Jr., Gwyneth Paltrow, Jon Favreau and Don Cheadle all were outstanding and while I was happy to see Paltrow’s Pepper finally get to do some action onscreen, the most obvious standout was Robert Downey Jr., with possibly his best and most earnest portrayal of Tony Stark to date. I was once again impressed by his uncanny ability to balance every aspect of this character and still make it fun to watch.

Now, my few problems with the film are mostly small things; the film is just two hours and they have crammed so many new characters and back stories into it that some feel rushed and somewhat brief. Also, there are many open-ended questions that are never answered or are just glossed over, which should have been addressed further in the film. There is a certain twist that might not make comic book fans happy, but as it seems to goes along with the story being told I am willing to not let it spoil the movie for me.

All told, the pros far outweigh the cons and this film is successful in my eyes in wrapping up the trilogy of Iron Man in a way that is fun, satisfying and, of course, leaves you craving more. The movie, which opened in the overseas market last week, has already broken records set by “The Avengers” opening weekend and is very likely going to be doing quite well here domestically as well. The addition of 3D once again adds to the action sequences and just seeing the Air Force One scene in 3D makes the up-charge nearly worth it all on its own.

I do have many small questions about things in the film, but only time and possibly the director’s commentary on the DVD will be able to explain some things to me. I believe that Shane Black has purposefully built a series of thought-provoking moments and hidden Easter Eggs into the movie to be further explored by multiple viewings or interviews down the road.

Regardless of its few faults, “Iron Man 3” is a film not to be missed on the big screen and it will surely have fans clamoring for more Iron Man films in the future. 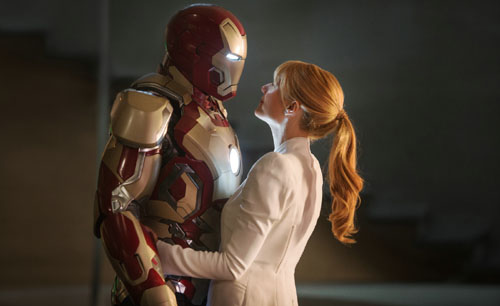 “Iron Man 3” opens in theaters Friday, May 3. It is rated PG-13 for sequences of sci-fi action and violence throughout and brief suggestive content.