Hardly the first film about The Great War, the pin-point focus of this essay on mental disintegration makes it one of the best. It is a stripped-down production, shot almost entirely in the mud-filled trench sets. Most of the dialogue takes place in the incredibly squalid officers’ quarters where commanding officer Captain Stanhope (Sam Claflin) quietly loses his sanity. 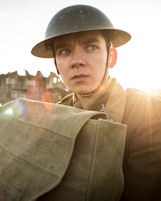 Not a lot of groaning here, heaven forbid. All the soldiers save one, (Hibbert, played to the hilt by Tom Sturridge) take their medicine like men. The medicine of choice for the Captain being whiskey, straight from the bottle, thank you. Given the circumstances, the surprise is that he is the only one seeing worms crawling out of the walls by the hundreds on the rare occasion that his blood alcohol level dips into marginal sobriety.

Paul Bettany gets much of the screen time as father figure Osborne, the philosopher and sanity measure of the group. Naturally, he gets it sooner than most, symbolic of what happens to anybody who dares look The Great War in the eye. Good natured Stephen is portrayed in a perfect performance by two-time BAFTA nominee Graham Trotter. He is the only person in the group who accepts war for what it is, his job. In a similarly sterling turn, Toby Jones plays the cook Mason who controls not only the food, but much of the irony in the trench. Try as he might to stir up a debate over why they were cheated into canned apricots instead of pineapple, nobody seems to care. The flavor of the soup as “yellow” is as good as any.

Thousand-mile stares are a dime a dozen for most everybody, much of the time, except for green recruit Raleigh. Asa Butterfield’s character is critical as he is not only the exact opposite of Captain Stanhope, but his closest friend in the unit. An old school chum, we do not know exactly what is afoot when, at the start of the movie, he calls in a family connection to force The Colonel (Robert Glenister) to station him with his doomed friend. Raleigh represents not only the soon-to-be-disillusioned hope of a short war with a painless victory, he is what Stanhope was before the Captain was driven insane by his profession.

This is not so much a war story as a tale of losing all hope. It could have been set in turn-of-the-century London tenements just as well, with a young clerk passing out from hunger and then freezing to death with his family after being fired for an insignificant infraction. In this war, people die every day for no reason, at random. When The Colonel calls in Stanhope for orders, he describes the upcoming German offensive, which everybody knows about. Even so, it is a bone chilling moment when he adds, almost as an aside, that given the fact of no available support and overwhelming German forces, Stanhope’s unit should, simply, “hold out as long as possible.”

It is not just the simple fact of daily death that drives the men insane, but the calm that precedes it and follows it and the banal efficiency of it all. When director Saul Dibb takes you out of the calm insanity of the trenches and into the miasma of the killing fields, it is for real. 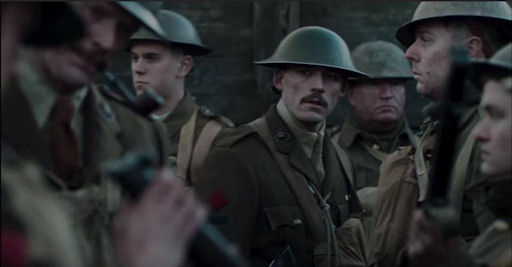