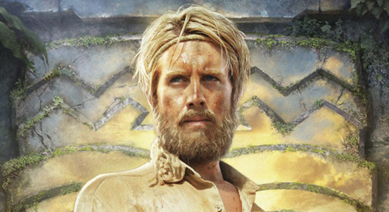 In the running as one of the five nominees for Best Foreign Film, “Kon-Tiki” delivers an entertaining adventure with a terrifying storm, shark attacks and six very handsome Scandinavian men.

Norwegians are noted for being self-sufficient, sparing of words (they talk if they have something to talk about), independent-minded, persevering and candid, with quite a sense of humor. Thor Heyerdahl, the Kon-Tiki captain, matches these characteristics with an indomitable spirit.

However, Heyerdahl was also, as a crewmate calls out with a laugh, absolutely “self-absorbed.” Even though he has family responsibilities with a wife and two young children, leaving them with little money he leaves for months to pursue his own adventures.

In addition, he is also a bit foolhardy and reckless in both his leadership and scientific contentions. Though he comes from a country famous for seafaring traditions, he didn’t know how to sail or swim. Plus, his scientific ideas are neither scaffolded on scientific research nor proved with rigorous investigation.

Despite all this, “Kon-Tiki” presents a true-life adventure story with some startling marine cinematography set to a gorgeously majestic score by Johan Sõderqvist. The following trailer, with its haunting music, is beautiful to watch.

Being that Heyerdahl’s theories on genetic origin and human migration, based on wind and sea currents, have never been accepted by the scientific community, the film cannot claim a victory in that sense. However, Heyerdahl does prove that small balsa wood rafts can sail with the currents to exotic Polynesian islands and he does reflect a hunger in the human spirit for adventure and exploration.

Though his theories may never be proved, Heyerdahl was an early proponent of environmentalism and a champion of peace and justice issues. Hopefully, one day there will be a sequel to this film that encompasses a study of Heyerdahl’s total life with his subsequent exploration challenges.

This is the last week of the Portland International Film Festival. The best films in the world are shown here in conjunction with the Portland International Jazz Festival. Oregon, the state best known for its respect for independent thinking and green policies, is the best place in the world for a festival that legitimately “seeks to explore the diversity of not only the art of film, but of the world around us.”