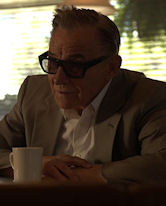 Aging tales of mobsters seem to have turned into tales of aging mobsters as the gangster flick goes the way of the western. An easy going attempt to revise history, at least a little, finds its way as a suitable genre follow up to the successful “The Irishman.” A memoir providing a framework, or an excuse, to parade memorable characters across the screen for our entertainment, “Lansky” does not attempt to show anyone as they were. The honorable and humorous are emphasized and the brutal and psychotic are glossed over.

After all, they were simply giving America what it asked for in providing our nation with plausible deniability of our sins that were somewhat Puritanical in the first place. Which leads us to the patriotic part of being a successful large scale criminal. This movie joins the currently released “My Name is Bulger” and the redoubtable “The Departed” in stories of psycho criminals who were informants or otherwise helped federal law enforcement or spy agencies.

As entertaining as these tales are, there should always be an undercurrent of stubborn disbelief lest a younger generation misunderstand and think, for example, that a combination of Mother Teresa and Al Capone might be a good thing. It would not. There is no air conditioning in hell for one who has destroyed countless lives and coincidentally informed on a closet Nazi.

For those who love Harvey Keitel and believe him to be the perfect fictional gangster, his work as the elder Meyer Lansky shines. Overlook the possibility that this was just easy money for him as he only had one costume and most of his talking was done sitting down and drinking coffee. The real heavy lifting went to John Magaro as the working Lansky, the man who probably, really, did mourn the unfortunate but necessary snuffing of his pal Ben “Bugsy” Siegal. The two men did, indeed, invent the Las Vegas that we know today and did, indeed, provide gambling to untold millions of needy Americans before the government figured it out and took over the operation.

Which brings us to the best part of the show, David Cade as Ben Siegel. Unfortunately, Siegal’s name is not in the title. Even so, he had the best line to the effect, “What was I gonna do, making eight bucks a week in my dad’s tailor shop? You (Lansky) could have done anything….” No doubt, he could have done anything, just as uber-cheater Frank Abagnale could have. If there is a moral to this story that appears to be it. Even so, the screenplay (by director Eytan Rockaway and dad Robert) makes the criminal part of it look like a lot more fun. As long as one is not killed.

Plain Jane cinematography and soundtrack, the usual cast of supporting actors and cartoon like sets provided by one or another of the several dozen producers let the story tell itself. More to the point, they let the audience fill in the gaps as they wish. After all, that is what present day organized crime is all about, is it not? Giving us all plausible deniability for the sins we simply cannot do without.