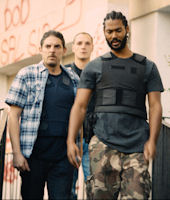 This heavily updated version of Victor Hugo’s classic adds timely touches of tragedy. Set in today’s Montfermeil suburb of Paris, the social estate called “les Bosquets” is home to multinationals starting a new life in France. North African, Middle Eastern, and Roma come looking for a future without death at every doorstep. What they find is an institution with little time to suffer cultural and religious niceties, a city that although better than their origin, demands superhuman strength to survive.

Writer/director Ladj Ly (co-written with Giordano Gederlini and Alexis Manenti) departs substantially from the original novel, perhaps intentionally so. This is 150 years later and things have changed, at least on the surface. Under the wealth, privilege and power of visible Paris live a mass of unempowered poor and working class persons whose lives are a daily struggle for dignity. They are allowed to stay in France as a goodwill gesture, it seems, a gesture that gives them shelter and nothing more.

Told in the context of a cop story, the movie features a vibrant cast. The good cop, the bad cop and the people caught in between. The people in between are children, giving the story a sense of urgency that rises beyond the usual fray of adult versus adult. No matter who wins, the children will be around long after we are gone. They will be the world, and the quality of that world is being determined right now.

Good cop Stephane (Damien Bonnard) parachutes into the Montfermeil hot-pot from the country under sketchy circumstances. He brings a vague sense of guilt to the opening scenes, ratcheting up the pressure right from the start. Bad cop Chris (Alexis Manenti) walks a fine line between testosterone soaked pro-wrestler wannabee and outright lunatic. Almost too bad to be believed, the screenplay exaggerates him more than required. His partner Gwada (Djebril Zonga), an African Muslim, brings his own sense of guilt and estrangement to his job.

In a thoroughly superb and well-directed cast, Issa Perica stands out as teenager Issa, charismatic leader of local street kids termed “Bugs” by the police. Children will come to play a major part in this movie. Conventional law has the guns, but the kids have the numbers. In an odd and slightly droll echo of the prewar American “Dead End” kids’ trope, the tots know more than the cops. Crazy and immature, like the world they live in, the children band together in a do-or-die brotherhood that makes the adults look like amateurs.

In the riveting conclusion it is a toss of the coin who sees the situation as it is and who is really in control. Honorary Oscar nomination for drone geek Buzz (Al-Hassan Ly), who accidentally films police brutality to get the action in high gear. Lenser kudos to DP Julien Poupard who also shot last year’s Cannes award winner “The Trouble With You.” Launching this movie into MOMA’s 2019 MOMA Contenders series, there will be more to come from this great cast and crew.