Werner Herzog has made some great documentaries in his time. This is not one of them. 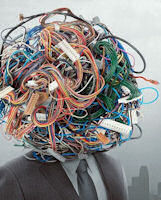 A confused hodge-podge of social criticism, sci-fi prognostics and impending internet doom, the film unfolds like a bad dream. Aimless interviews with academics that are either blithering mad or talking so far over the heads of the audience they may as well be speaking Martian alternate with Jetsons’ futuristic concepts like lights that go on when you think they should and, believe it or not, cars that drive themselves.

The idea about the cars that drive themselves is juxtaposed with the theory that the larger a network gets, the better it works. Add that to the robots that learn and you have a giant network of robotic cars that learn from each other’s mistakes. The end result of this could be that the cars refuse to run at all because of the environmental damage, or they intentionally kill us all to avoid the extra load.

Hard to say, and the film does not give us a lot of answers. It does address the burning question of whether or not the internet dreams of itself, something that is on everyone’s mind these days. There is also the funny story about the early net server that had a glitch that indicated it would send messages in zero time. As the network automatically optimized itself, the entire traffic flow directed itself to the site, causing a virtual crash and the cessation of all information flow.

One hopes they are not in the robotic car that develops that glitch.

A legendary hacker describes how he faked employment with Motorola and talked a clerk into divulging code to him over the phone. If this is entertainment to Herzog, he should watch “Catch Me If You Can” a half dozen times and get a real thrill. There is nothing cool, smart or futuristic about a sociopathic adult-child wasting the time of normal working people by acting like a spoiled brat.

This pathetic show of force is followed up by the inevitable “what if” someone crashed the entire net on purpose and shut off all of our electricity, water, food, gasoline, air, beer and Pokémon. We would be in one heck of a pickle. Like the parents in Korea, the most connected city in the world, who let their child die of neglect because they were so addicted to an internet game. Or maybe it was because they were insane. Or stupid. Well, one way or the other we better watch out.

There is a fascinating interview with residents of a remote refuge providing the needy with an escape from nearly omnipresent radio waves. When the only alternative is to live in a “Faraday cage” (no, it has nothing to with professional wrestling) you go where you have to go.

Be there or be unconnected.