Do you remember the walking battle machines in “Star Wars: The Empire Strikes Back”? How about the dragon in “Dragonslayer”? Or the multitude of dinosaurs in “Jurassic Park”?

If you enjoyed them, and so many other marvels, both stop action and CGI, you can thank Phil Tipett.

This versatile behind-the-scenes guy was inspired by the great Ray Harryhausen (“Earth vs The Flying Saucers,” “Five Million Miles to Earth,” “Clash of the Titans”) when he saw “The 7th Voyage of Sinbad” – at the age of seven. Two Oscars and many other awards later, Tipett is still at it, releasing, after 30 years in development, “Mad God.”

OK, so 20 of those years were spent on the shelf while director Tipett worked on other projects. However, a $125,000 Kickstarter in 2013 resurrected it. Tipett’s crew was made up entirely of volunteers, students from local art schools and industry veterans who remember when effects were made by people photographing puppets one frame at a time. That is the technique used to create “Mad God.”

And mad it is.

This 83-minute film is so crammed with creativity, darkness, and grotequeries, that it seems to run longer. Multiple viewing would be required to take in a fraction of what the screen bombards you with. As natural and normal as Tipett made his “Jurassic” dinosaurs appear, each one of the “characters” in this stop-action masterpiece is bizarre and foul.

There is an apparent “Cardinal” with the incredibly long finger and toe nails indicative of no actual work, who sends “assassins” down into an underground hell where they meet the failed fate of hundreds sent before. Manufactured humanoids made of grass, brutal medical staff dissecting a still live (apparently) victim, sweet innocent mushroom creatures; these scratch the surface of what he delivers. If you are familiar with “The Pope’s Children” from “A Canticle for Liebowitz,” you still aren’t prepared for the beings this film offers.

That “hell” is reminiscent of nothing so much as a destroyed, post-apocalyptic sewage treatment plant, with huge pipes, ominous corrupted machinery, and an overabundance of brownish, misshapen, slightly glistening…stuff. I haven’t seen so much “stuff” scattered around since my last visit to the local dog park (Pick up after your mutt – you know who you are!).

Despite that, the background through which the “assassin” makes his way is rich in boomer generation pop culture icons: mostly in broken-down, ash covered abandonment. Robby the Robot, various Harryhausen figures, the Tingler from the movie of the same name, even the silhouette of Mad Magazine’s Alfred E. Newman to name a few. And, as I said, far more than you will recognize in one viewing.

Not to leave out significant detail, there is war going on down there, from the indiscriminate destruction of hapless humanoid slaves to multiple nuclear detonations. The latter probably explain the equally incredible variation in the life forms we are bombarded with. I won’t attempt to describe these more than I already have lest I spoil your appetite for the next few days.

Other film critics have complained over the lack of dialogue, plot, character development, and redeeming values presented. Guilty as charged. However, that doesn’t mean there isn’t a point to it all – even if you don’t want to face it.

I enjoyed this opus, but many will not. It takes a certain frame of mind to see, much less appreciate. 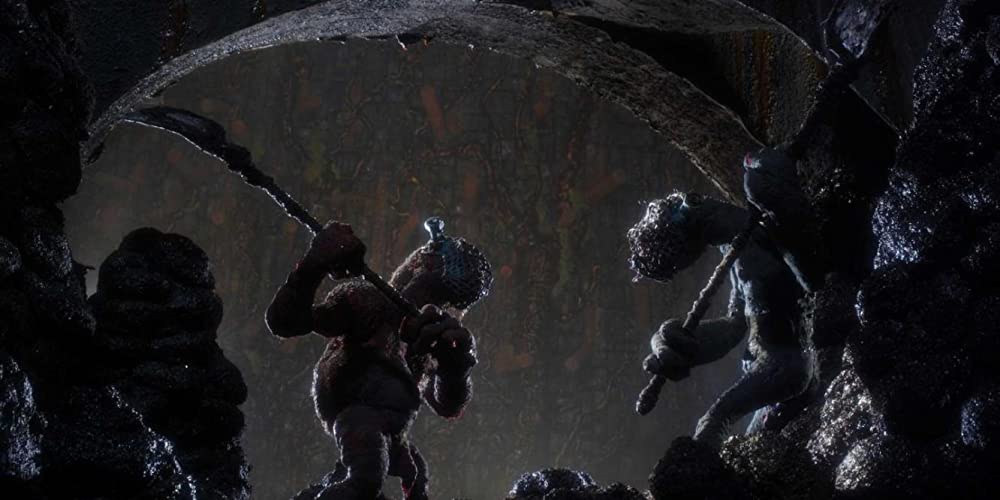