With just under three weeks until its United States release date, Marvel granted a very select few people tickets to see “The Avengers” in stunning IMAX 3D in four locations. This was the ultimate reward for the most diehard of fans, and although it was hectic and there was a major lack of sleep, I believe everyone would say it was worth it. To be fair to those who have to wait until May 4 to see the film, this will be a SPOILER FREE review where I will focus on the film and not the specifics of the plot and storyline. This is safe for everyone to read and for those who want to know every detail of the film, come back to It’s Just Movies on May 4 where there will be a full discussion and breakdown of the film itself.

Ever since its creation in 1963, “The Avengers” comics have been a fan favorite for the sheer fact that comic book aficionados got to see many of their favorite heroes together fighting side-by-side. Now, in this new era of comic book movies, we have been leading up to the moment where they appear on the big screen together. Ever since Nick Fury showed up in the end credits of “Iron Man” in 2008 and mentioned the Avengers Initiative, we have been waiting. Over the course of five films, have been introduced to the idea that all of these heroes live in the same world. The culmination of this set–up was last year’s “Captain America: The First Avenger,” where we see Steve Rogers rescued from his apparent death from the ice and he has awakened in our time.

We have seen an incredible collaboration and joining of superhero universes all leading up to this very moment, seeing Marvel’s “The Avengers” finally come to fruition. Directed and written by the master Joss Whedon, the time has come for a movie of such epic proportions that every comic book aficionado, enthusiastic superhero lover and action genre zealot is dying to see it.

If you’re reading this, then you probably already know the basic premise of “The Avengers,” but here is the plot breakdown just in case you didn’t:

S.H.I.E.L.D. Nick Fury (Samuel L. Jackson) is conducting experiments on the Tesseract — or Cosmic Cube as it’s called in “Captain America: The First Avenger” — with Professor Erik Selvig (Stellan Skarsgård), when Loki (Tom Hiddleston) uses those power surges to open a portal to Earth. Once here, he decimates S.H.I.E.L.D.’s labs and takes the Tesseract for his own diabolical schemes. Nick Fury knows its time and begins Operation Avengers. He assembles the group he has already set up, consisting of: Tony Stark (Robert Downey Jr.) for his Iron Man suit; Steve Rogers/Captain America (Chris Evans); Thor (Chris Hemsworth); a very reluctant Bruce Banner/Hulk (Mark Ruffalo); and two expert spies and S.H.I.E.L.D. agents Natasha Romanoff/Black Widow (Scarlett Johansson), and Clint Barton/Hawkeye (Jeremy Renner). Along with fellow S.H.I.E.L.D. agents Maria Hill (Cobie Smulders) and Phil Coulson (Clark Gregg), this newly-formed team must figure out its differences and move past them in order to succeed in destroying the Tesseract and stopping the nefarious plot to destroy and save mankind. Loki begins to wreak havoc as the team scrambles to overcome their own differences to stop him from taking over the world. When it is revealed that Loki has aligned himself with some mysterious alien race and he has an entire army at his disposal, we know this is the fight of their lives in which anything can happen and these heroes must work together if there is any hope of surviving this Armageddon.

When it comes to such a massive blockbuster as “The Avengers,” there are so many huge stars that have even bigger character personas and it is nearly inconceivable to think that they could all be balanced well in a movie together. Director Joss Whedon has not only found a way to balance them, but has also given each a time to shine. There are even some revealing and intimate character moments where their bravado is down and we get to see a side previously unseen. Obviously, some have more screen time than others, but that is to be expected. For those worried that ordinary humans will be lost in this mix of power and technology, don’t fear because Black Widow and Hawkeye are front and center holding their own against the alien invaders. 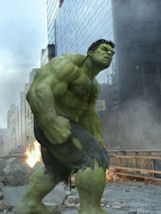 Though I love each character, the two that stood out the most to me were Loki and the Hulk. Loki, who we saw as menacing and mischievous in “Thor,” has come full circle as a truly evil villain, willing to kill and do what it takes to win. He has become the ultimate bad guy and one to fear. Tom Hiddleston’s performance hit all the right notes and even though he is bad, you still find yourself liking him, just a bit. Now Mark Ruffalo is known for many things, but I was totally blown away by his very authentic and real portrayal as Bruce Banner and his resistance to embracing the inner Hulk within. It seemed to be very genuine and authentic and was therefore easy to associate with.

Interestingly enough, Ruffalo is the very first actor ever to play both Bruce Banner and the Hulk thanks to an advance in motion capture technology that allowed him to play the large green monster. You can clearly see Ruffalo in every moment where Hulk in action. I talked with others who saw the film and every single one of them agreed that the Hulk was the character that surprised them the most.

Whedon’s writing includes witty banter between the characters and the relationships are shown almost as sibling rivalry when small squabbles between the heroes can turn into large scale fights. The Avengers form a dysfunctional family and it was great to see that just because they all are out to save the world together, it doesn’t mean that they will inherently like each other. When ego’s and superpowers come into play things can get messy, and when the world is literally at stake, you must overcome your difference, and stand united. The story is strong and even during the slower moments, everything you see has a purpose. There are no unnecessary action sequences and every scene has a role in the movie as a whole. We come to love these characters even more than we did starting off, but not because they are strong, heroic and the saviors of mankind, because they are flawed individuals who are more than heroes, they are human beings and can be related to on some level.

The action is immense, and the pace is strong, but how was the 3D, you may ask? As many of you probably know, the movie wasn’t filmed in 3D, but post-converted, and for this reason the 3D effects seems to be lacking in the first half of the film. However, as with any other computer effects heavy film, the second half of the film with its major battles full of alien soldiers, spaceships and total destruction of the city is incredible and intense. Since this final battle is larger than any other seen before, it is long and intense and for that reason I would suggest those who like and appreciate 3D in movies see “The Avengers” that way, those who aren’t big fans can skip this added feature and still enjoy the film.

With incredibly accurate character details in the story, the movie is on point and I’m sure everyone from die-hard fans to those coming in blind will enjoy all “The Avengers” has to offer. Not only is it insanely funny, but it also is full of moments of intense action, hero team-ups and some incredibly heartfelt and sad moments, too. It has everything that I expected and more and I definitely would suggest everyone go see this movie, you will be entertained.

One final way to possibly describe “The Avengers”: it has the clever comedy of Joss Whedon, mixed with action sequences that would put Michael Bay to shame and the heart and sincerity of “E.T.: The Extraterrestrial.” Marvel’s “The Avengers” is one of their best films yet — right on mark with “Iron Man” — and it showcases all the hard work they have put into this unprecedented collaboration of superheroes on the big screen. It is a must see for everyone and you don’t have to be familiar with these characters to enjoy it, you will know and love them by the end of the film.

Go see Marvel’s “The Avengers” and be a part of the film that is sure to dominate the summer box office. It opens in theaters May 4 in 2D, RealD3D and IMAX 3D and is not yet rated but will likely be PG-13 for intense sci-fi violence and mild language. As with nearly every other Marvel film, stay during the closing credits, there is a reveal as to who is behind Loki’s army and the implications it brings to the possible sequel.