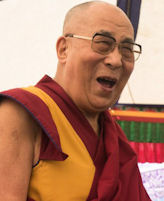 HH Dalai Lama hosted Archbishop Desmond Tutu at The Tibetan Children’s Village, a boarding school/orphanage in Dharamsala, North India, for children from Tibet. Each child stood up to tell the story of how he or she arrived at this school. One girl spoke of being hid in the bus cushions so the Chinese border police would not find her. But when she spoke the words, “my family” she could not go on and broke into tears.

The audience went still. Tutu’s daughter gently approached her and enfolded her in her arms. Tutu gravely said, “Sorry.” But HH Dalai Lama spoke up, explaining this separation was an opportunity to learn about her culture.

How do we find joy in the face of life’s inevitable suffering?

In “Mission Joy,” HH Dali Lama and Archbishop Tutu tell their own stories of tragedy and grief. The Dalai Lama was removed from his mother at two years of age. There was no monk to serve as a loving parent figure. He was groomed to be the leader of the Tibetans, but had to flee for his life instead.

On the other hand, the Archbishop spoke softly about not intervening for his mother who suffered when his father changed character when he got drunk.

They asked each other how they overcame their sadness and grief. Their explanations reflect a universal spiritual message that transcends the constructs of separate religious sects.

Why did they meet?

Archbishop Desmond Tutu was planning his 80th birthday for Sept. 7, 2011, in the Republic of South Africa. Because of sensitivity to China’s claim on Tibet, HH Dalai Lama was refused a visa. Tutu, who with Nelson Mandela brought apartheid to an end in South Africa, was appalled. But they found another way to celebrate.

In April of 2015, Archbishop Tutu was able to travel to Dharamsala where they celebrated their birthdays together, trying to blow out trick candles that kept coming back lit.

Communion
HH Dalai Lama brought the Archbishop into his sacred sanctum. There Tutu wanted to give communion, the most sacred of sacraments, to his friend. Both have dogma prohibiting this. HH Dalai Lama is not a Christian and he cannot drink wine. But this situation provided yet another opportunity, and example, of how to think beyond restrictions.

Opportunity
Archbishop Tutu and HH Dalai Lama, both Nobel Peace Prize winners, co-wrote a book published in 2016: “The Book of Joy: Lasting Happiness in a Changing World,” based on this 2015 visit. Yes, there is suffering, but while that deepens compassion and empathy it also forces another path, “another opportunity.”

“Mission Joy,” directed by Academy Award-winning director Louie Psihoyosis, is simply a must-see. It is infused with valuable instruction while simultaneously reflecting how these two spiritual brothers express their teaching in their lives. 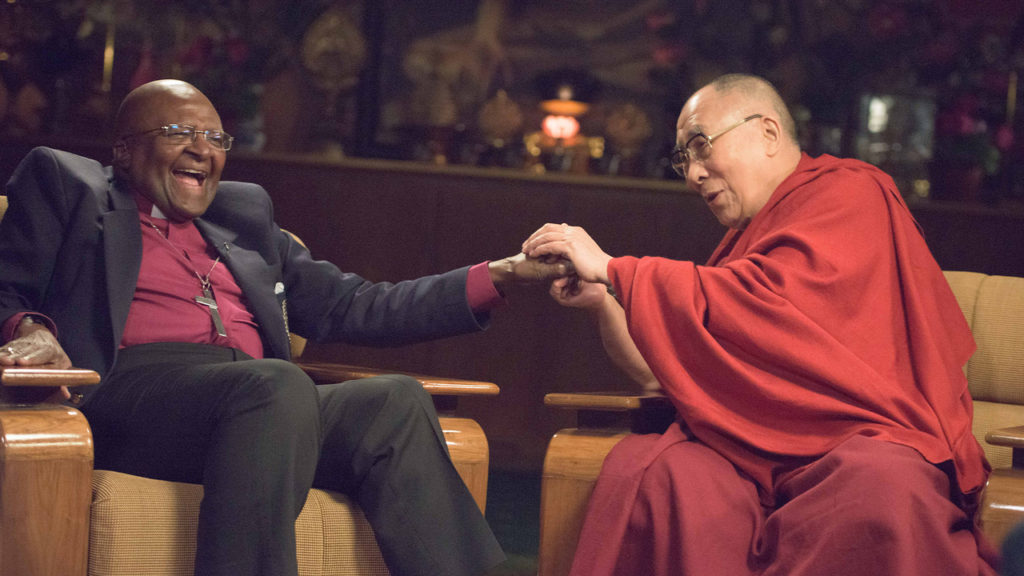 
Premiering at the Tribeca Film Festival on June 12, this inspiring film will be available for streaming through June 23, 2021.