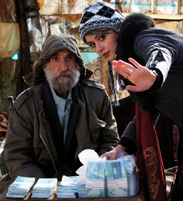 Under what circumstances would you accept a big plastic bag full of money? Would it matter who gave it to you or where it came from? In addition, if you were asked to do something for this fortune, where would you draw the line? This weird Iranian film poses some unusual dilemmas and makes some uncomfortable observations.

“Modest Reception” (aka “Paziraie sadeh”) opens with the following words that we are left to sort out: “Do not render in vain your charity by grandiosity or injury…or you shall resemble dust on a smooth rock, washed away by torrents of rain.”

A brother and sister travel in a Lexus coupe in a remote, cold, mountainous area of Iran close to the border (with which country we don’t know). A guard stops them to check their car as they travel through. The local inhabitants are poor, suffering in the snow and isolation.

The siblings have been sent by their wealthy American mother to distribute 200 bags of money, each containing five million Iranian rials, to the people of this region. In today’s exchange rate this means that each bag contains $407. To put that in perspective, note that Iran’s average income is $13,300. (CIA World Factbook).

I’m guessing that these wretched mountain people of Iran, living above the treeline in visqueen shelters, selling twigs for fire and cooking over outdoor stoves scramble for significantly less. $400 could be what they make in a year and the siblings are willing to dump off several bags with each recipient.

However, to complicate the situation, the subjects of the surprise gifts are proud, self-sufficient Iranian people who live far from a city and its opportunities for temptation. They don’t trust anyone and most have a keen sense of integrity.

The source of the corruption, the money, of course comes from the US. With each attempt to unload bags of wealth onto the mountain people our siblings twist the reason or qualifications for the receipt. Sometimes there are problems with the mountain people, but the deeper problems are with the givers, the brother and sister, who manage to corrupt the potential good intentions of the gift giving.

Mani Haghighi, the producer, director, co-writer and star, is a western educated Iranian filmmaker. He goes pretty nuts in the film, all the time wearing his arm in a cast. Does this represent his character’s handicapped relationship to the world and his own character flaws?

There are many questions to ask and ponder in this odd film which is a part of the Global Lens annual touring exhibition sponsored by the Global Film Initiative, an organization that encourages filmmaking in countries with developing film communities. 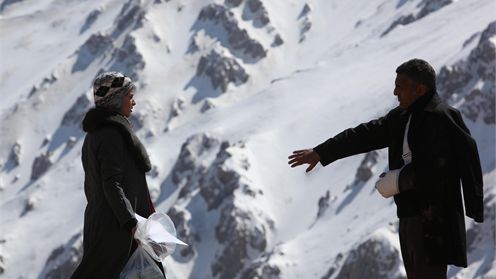