At first, it appears that Jordan Peele (“Get Out”) has given us a two-fer: two separate stories for the price of one.

The opening story is about an horrendous incident on the site of a family oriented TV comedy, Gordy’s Home, about a human-like chimpanzee, Gordy (Terry Notary – “Kong-Skull Island”), who goes berserk and kills or maims all but one of the human cast members – a little Asian boy named Jupe (Jacob Kim).

The second is a mystery involving the sudden death of Otis Heywood (Keith David – “Unplugged”), the patriarch of a horse training family whose central California ranch serves the film industry. He was killed by a nickel that fell from the sky, piercing his brain.

OJ (Daniel Kaluuya – “Get Out”) and Emerald (Keke Palmer – “Alice”) play the children of the nickel-killed Otis, and take over the running of the ranch. OJ has been working with his Dad all this time, and is the stereotype taciturn farmer/rancher. He mumbles a lot – when he talks at all. Emerald is the frantic, fast-talking liberated one who sees a chance to make some money and perhaps get the best of her father at last.

At the edge of the ranch is a “wild west” attraction, Jupiter’s Claim, owned and run by Ricky Park (Steven Yuen – “Minari”), the grown-up Jupe from the Gordy’s Home show. He has been buying horses from OJ and using them in his act. Emerald accompanies OJ as he delivers another horse to Ricky, and is treated to the whole grisly story as Ricky proudly displays his “museum” recalling the chimp attack.

It soon becomes clear that there is something lurking in the clouds over the harsh but beautifully photographed landscape. A Fry’s techie named Angel (Brandon Perea – “American Insurrection”) enlists himself to help OJ and Emerald get an “Oprah Shot” – a clear picture of what they believe is a UFO. When that fails they try to enlist a modern day “white hunter,” Antlers Holst (Michael Wincott – “Forsaken”) – a nature photographer famous for his incredible ability to get “the shot.” He warns them of the dangers involved, but eventually also joins them.

From this point on, the story tightens into a series of climaxes involving all parties and all the narrative strings.

This is a bizarre film. I’m not giving anything away at this point by identifying it as a film about extraterrestrial life. However, this is different from the usual vicious aliens in a space ship. Perhaps its closest parallel is Columbia’s atrocious “The Giant Claw” from 1957. Of course the directing, writing, acting, production values, visuals, and everything else in “Nope” might as well be from a far, far better planet. Nonetheless, this film does owe something to that terror from the sky and other ‘50s horror.

Another possible antecedent, also from 1957, is Roger Corman’s “Not of this Earth,” with a name similar to Peele’s “Nope” (Not Of Planet Earth). In Corman’s opus, an alien comes from another planet without using a space ship seeking human blood as a solution to his race-wide die off. Eye to eye contact plays an important role, and the story even uses a floating, vampire squid like creature as an assassination device.

As I mentioned before, the visuals in “Nope” are beautiful. The small lit areas lying naked in the ominous evening under a wide sky (always with some clouds); the almost treeless rolling terrain in broad daylight where there is no place to hide.

Music is also a plus, especially the closing theme – a rollicking takeoff on 1960s spaghetti western themes.

Combine those with the competent directing, intelligent (if not always intelligible) writing, and solid performances, and you have a film worth watching. It’s not “Get Out,” but it is a good, thought-provoking film. 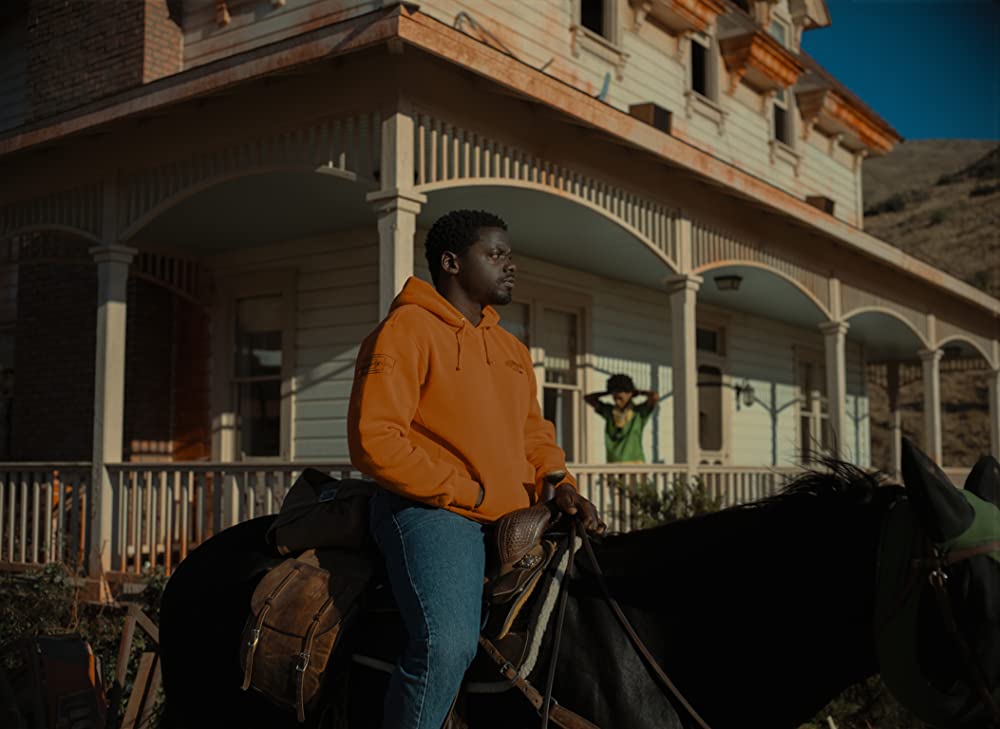