Celebrating Jerome Robbins’ birth centennial, ballet companies are resurrecting his choreographed works throughout the US this spring. Most famous for his collaboration with Leonard Bernstein in creating “West Side Story,” Robbins has been described as the “quintessential American choreographer” by Lourdes Lopez, former dancer for his New York City Ballet and now director of the Miami City Ballet, because “he really understood America and American feelings.” 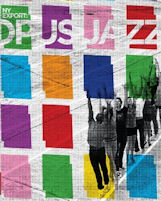 Reminiscent of the music and dance in “West Side Story,” “NY Export: Opus Jazz” is Robbins’ solo creation reflecting American youth in the big city. Divided into five different acts, each beginning with the mundane and culminating in artistic magic, the original Robbins’ ballet is transferred from stage to location in greater Manhattan places like pre-renovation High Line, McCarren Pool, Coney Island, Red Hook, and Carroll Gardens.

A cinematic challenge, anamorphic 35 mm film cameras also travel in the dance, from all sides as well as from up above, to rhythms complementary to the movement, beat and tone of the performance.

At worrisome first, it seems that there will only be brief vignettes of ordinary life for a young person in New York City. A lithesome girl is walking through the Coney Island surf, dropping to sunbathe on a blanket, while another stares listlessly out a window as the subway train monotonously, mechanically presses on its boring routine route. Another is with a child, impatiently pouring water into a wading pool for a child he ignores. Someone else is hanging out laundry, another is ominously eyeing the water from mid-point on a bridge. No one makes a sound. No one smiles.

Entirely shot on location, these disaffected people converge from different directions onto an ill-kept court. There, they are energized. In crisply choreographed movement that conveys a complex, anomic feeling in the midst of trying to figure out who you are in the mass of a big city, “Opus Jazz” triumphs in energy and artistic genius.

One entree to a dance begins at a crowded burger joint. A slender gal is sitting in one booth with her back to a handsome man sitting on the other side. He belatedly notices her leave and irresistibly follows her to a small grassy field where a black track outlines a path above the city. Their interchange, at first gracefully tentative, is a modern pas de deux expressing the challenge and complicated push and pull of a fractured society.

Conceived, created and produced by New York City Ballet soloists Ellen Bar and Sean Suozzi, this film was initially released in 2010. In a PBS interview, they explain that the production is an adaptation of Jerome Robbins’ “ballet in sneakers” (1958), which was inspired by the work in “West Side Story.” Bar, now the director of Media Projects for the NYCB, understands, like Robbins, the power of a camera in sync with the dance.

“NY Export: Opus Jazz” will play at both the Bodyvox Dance Center and the Northwest Film Center in Portland, Oregon, on April 12 and 14.