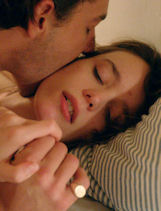 The film is the story of Joe (Charlotte Gainsbourg) as told through a series of flashbacks to the only friend she ever had, Seligman (Stellan Skarsgård). At the opening of Part 1, Seligman finds Joe beaten and abandoned in a dark alley. It appears that her most recent experience with self-abusive sex has almost killed her. She seems to relate to the lonely bachelor Seligman and she opens up to him, and to the viewing audience. Part 1 is about her childhood and early adulthood.

Her childhood appears normal enough on the surface, filled with childhood hijinks and girlish giggles. However, when her mother (Connie Nielsen) is shown playing solitaire and Joe describes her as “The Cold Bitch” we know there is trouble in River City. Her father (Christian Slater) takes her on walks through the forest and is infatuated with the miracles of nature. Superficially he is the loving father who wants nothing more than to be a teacher and inspiration to his daughter. However, as he lies dying in the hospital there are strong intimations that he is dying a terminal alcoholic, a disease he has hidden from Joe. Her mother arrives at his death bed, is disgusted at the scene and walks away from them both.

Although this kind of construct helps the viewer makes sense of what is otherwise unfathomable, von Trier is not about to let us off so easy as to make this film an amateur counseling session or a cautionary tale warning of excessive sex. The sketchiness of these descriptions and the lack of an omniscient point of view force us to become one with Joe. We are not allowed to stand outside her, analyze her, judge her and become comfortably convinced that it could never happen to us.

Exactly the opposite, as the story unfolds we are made dreadfully aware that Joe is very like us. She is a person who is living out trauma subtly imbued in her by her parents’ secretly disastrous marriage. If anything, the film is more of a condemnation of bad marriage than it is a condemnation of social psychopathy.

This theme reaches a fever pitch in the most powerful, disturbing and just plain thrilling sequence in the film. Joe confronts yet another middle aged lover, “Mr. H.” (Hugo Speer), who happens to be married, with his own disgusting animal urges (which she has cultivated in him). Joe throws him out but he returns, having left his wife and three children for a second childhood with Joe, who, after all, still behaves like a ten year old.

As he enters with his suitcase and suits, behind him comes his cuckolded wife (Uma Thurman) dragging their three young boys, aged about six to twelve, behind her. She is furious, barely able to restrain herself from tearing Joe the home wrecker apart with her bare hands. 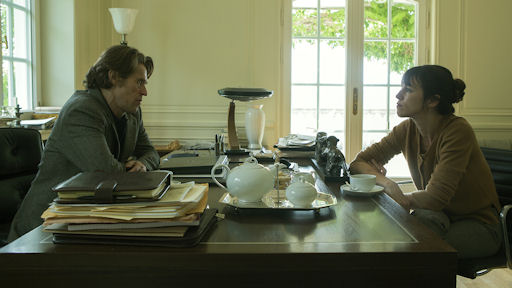 In one of the heaviest performances of the year, “Mrs. H” goes from shattered, abandoned lover to seething devil. As she works herself into a psychotic world of maniacal hatred for Joe, her transition is a graphic demonstration of the difference between the cool acceptance of Joe’s psychopathy by Mr. H and a more correct outrage that would be typical of a normal person.

Making an even more important point, in her tormented fury she has brought her children into the middle of the crucifixion. As such, they will be scarred for life, just as Joe is scared for life. Thus, the cycle of alienated sociopathy is passed from parent, to child, to parent, to child. This is a main point in part one.

The story is told within a series of rooms, there are very few shots outdoors. The colors are dark, subdues and fuzzy, adding to the dreamlike telling of the story. Except that like any dream we do not experience it as a dream while we dream it. It is as real as real life. That is exactly where von Trier takes us in “Nymphomaniac” Part 1. He takes us into the dream, or rather the nightmare, of a woman who is forbidden wakefulness by her inability to face the past. She blames herself for the ugliness of her parents’ lives and, as a result, sees only ugliness in herself and ugliness around her. In one memorable sequence, the film flashes though what seems like several dozen one second stills of male genitalia. These are not the male genitals of porn films, these are genitals chosen specifically for their ugliness. This is sex, the most loving and intimate of emotions, blasphemed into a plague of suffering and guilt.

Like his previous inquiry into the beast in all of us, “Dogville,” it is impossible to distinguish the victim from the perpetrator. Although Joe makes herself the victim, in their assaults her assailants only avail themselves of her bottomless pain.

The Nymphomaniac series is the follow-up to von Trier’s “Melancholia” which was preceded by the over-the-top “Antichrist.” The first two movies, and the final two-part film, form what is called von Trier’s “depression” trilogy. Is there a silver lining to any of this? Yes. It is only by examining our own lives and our own feelings that we move beyond past injuries. Especially in the case of groundless guilt, a little communication goes a long way. 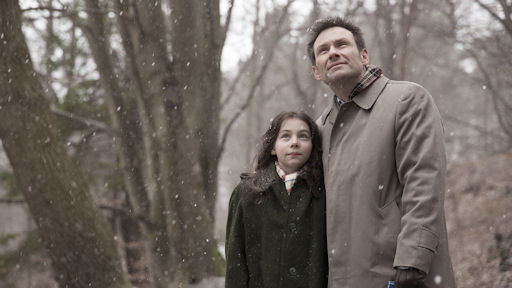 “Nymphomaniac: Part II,” which picks up with the story of Joe’s adulthood, stars Jamie Bell, Willem Dafoe, Mia Goth and Jean-Marc Barr in addition to Gainsbourg, Skarsgard, Martin and LaBeouf.