If you are in doubt about the nastiness of dorsal hemorrhagic fever, look no further than this flick. If you think it is bad when it infects the cows, just wait. Director Hubert Charuel’s bovine version of “The Cabin in the Woods” is brought to you by the 23rd Rendez-Vous with French Cinema, co-presented by Film Society of Lincoln Center and Unifrance. 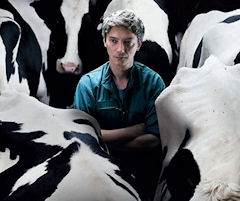 When it comes to crime thrillers, French films have a hard time measuring up to the American standards. In this riveting nail-biter, Pierre (Swann Arlaud) is working himself to the bone to save his family’s prestigious dairy farm when the internet brings the worst of news. An established, successful Belgian dairy farmer, not too far to the north, has been reported and confirmed to have at least one cow infected with the insidious bleeding ailment. Taking no chances, the government has slaughtered his entire herd. Promised some compensation for his life’s work, the work of generations, he has been given nothing. The Pierre sees this coming, alone with the audience.

Jumping at the slightest ailment in his herd, he calls the local veterinarian, his sister Pascale (a stunning Sara Giraudeau). She calls false alarm, but Pierre is a nervous wreck. Thanks to excellent direction by director Hubert Charuel, we are nervous wrecks as well. Suddenly the massive cows, big and strong enough to crush a man without a quiver, look like giant petri dishes, just waiting for the wrong microbe to float their way.

Director Charuel draws on his own experiences growing up on a dairy farm to craft an excellent screenplay (co-written with Claude Le Pape) that is as believable as it is intense. When Pierre discovers the first cow there is a panicked, guilt-ridden midnight sneak to hide the body that is the equal of any murder mystery. It should be, because Pierre is now fighting for more than his own life, he is fighting for his, and his family’s, legacy as the premier dairy establishment of France. He cannot visualize any life without the dairy.

Suffering the early stages of a nervous breakdown, he tries to hide the crisis from everybody, his friends, his family and the community. But it is not so easy. Each cow is tracked and her milk is monitored by government inspectors. When a cow is missing in the heavily protected industry, it is like a missing person. Almost worse, because cows have no way to escape and no place to run.

As in all good crime thrillers, one lie leads to another, to more guilt and to a steadily escalating lethal madness. Sleeplessness, nightmares and staggering exhaustion become Pierre’s life. The movie takes a beautiful dodge into horror territory when he discovers he is bleeding like the cows. Or is it a hallucination?

Driven to extremes, he lunges into the miasma to make one last deal with the devil. The result is worse than he could have imagined, as the devil wants more than simply saving cows. He wants what remains of Pierre’s soul. 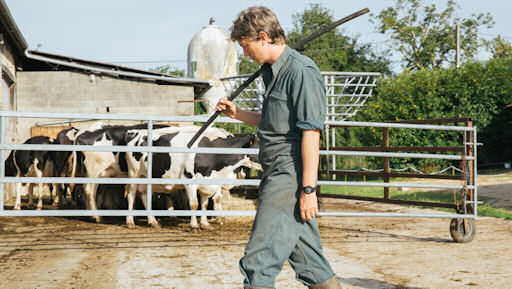