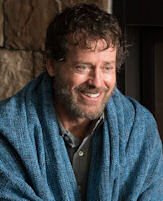 In the dark of night, middle-aged Phil awkwardly climbs over a fence and up onto the base of a Portland Bridge lamppost. To jump or not to jump?

Suddenly, we see his gorgeous vertical descent into the cold river below. Bubbles boil around his straight body as if he were a ballistic missile zeroing in on its target. Then, suspended by the end of momentum, he opens his eyes underwater in surprise.

That’s how “PHΦL” begins. Phil, a recently divorced dentist, is depressed and can’t find meaning in his life. As he clings to the lamp post, all the cars whiz by either not noticing him or not caring – except a group out for a joyride. They stop, with a cell phone poised for video. “Jump you idiot!” one of them catcalls.

How is a happy, meaningful life obtained?

Our searcher, Phil, is played by director/actor Greg Kinnear with Jack Lemmon-like comedic angst. Happy Michael Fisk, played with self-confident perfection by Bradley Whitford, comes to his office for a visual check-up, just to confirm that all is well with his perfect mouth. He’s upbeat and full of news about his happy life. Phil decides to follow him to see what makes him so happy.

Fisk, the happy patient, is wealthy with a beautiful wife and daughter. He is laughing and energetic as he spends time with his family. As Phil becomes obsessed with the object of his curiosity, he becomes a virtual stalker.

Phil is dazzled by how happy Fisk appears. His obsession eventually has him tail Fisk on a seemingly happy road excursion. Then Fisk stops at a deeply wooded area, energetically gets some items from his car, and takes off by foot into the mossy, fern-laden forest.

Phil stops his car at a safe distance and enmeshes himself in tree branches and damp underbrush trying to find Fisk’s path. When he does, full of shock, all his assumptions are put into question.

Like the poem about “Richard Cory,” Michael Fisk has it all: riches, looks, a slim and fit physique, a loving family, the admiration of his colleagues, and even good teeth.

Mazur, along with the excellent character interpretation of Kinnear, asks the ancient Greek questions.

Funny yet deep, Mazur has written a script that propels us to deep thought. Sometimes, I had difficulty understanding the character/plot twists. Where did Phil get the Spiros idea and what exactly was Fisk’s relationship with his drop-dead blond colleague? Perhaps Mazur intended that confusion; life is messy and doesn’t wrap well into a totally understandable package.

PHΦL, written with the phi symbol for philosophy, is a thought-provoking farce that releases in theaters, On Demand and Digital July 5, 2019. 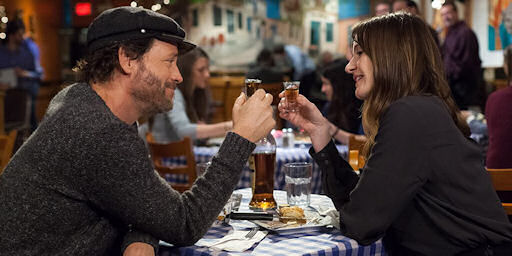