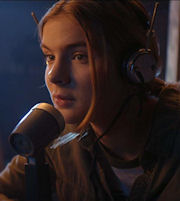 A flash and the lights go off. There is no power. After a while there is still no power. The power is off everywhere. At least everywhere in the film studio. Luckily, we have this old HAM amateur radio. Let’s connect the car battery to the power plug and see what happens. Science is dumped as the 12v DC battery is connected to the 120v AC power cord. It works, Grandpa is on the line. Let us go to Grandpa and be careful to not have any accidents on the way. Well, OK, we need a couple accidents, but nothing too serious.

After watching Reese (Brighton Sharbino) prep for what appears to be a Girl Scout trip in the wake of a major crisis, we know this is going to be the Huckleberry Finn version of the holocaust instead of the Stephen King treatment. Good enough, making this a fun film for the whole family, a bland lesson about not getting excited about, well, anything. The danger is that some may see this as evidence that we can survive a nuclear attack. Do yourself a favor and do not be fooled.

Dad and Grandpa are interesting ciphers, taking up space on the set to give Sharbino interacting objects. The first act is fun, showing the usual shock, awe and breakdown of law and order as people ransack stores for supplies. Gas is immediately gone as people flee and there is an ill-defined traffic jam before everyone is on his way. The low-tech story does not tell us where to, or why, they are fleeing. In fact, the story tells us nothing other than the immediacy of Reese getting to Grandpa.

The radioflash trope is gone as soon as it happens. What remains is a road trip to the wild side. The wild side is the country, where Reese runs into wild people, like farmers, small town residents and, luckily, psycho Maw and her brain damaged spawn. “Alice in Wonderland” and “Wizard of Oz” ensue, with updating in the person of Maw’s slavering, inbred, rural stereotype a la “Deliverance.”

The feckless sci-fi treatment and stumbling road movie are interspersed with hilariously camp travel brochure shots of the scenery and Reese’ contrived bio-observations (“Carpenter ants, break down the walls!”). The overall lesson, appropriate for ages of about five to seven, is that we should love our environment, not have nuclear war and trust Grandpa. Oh yes, watch out for inbred country people, they want their gibbering kids to do nasty things with you.

Lessons of an over-dependence on technology are jumbled in with lessons of paying attention while driving. Sane, normal country folk are mixed in with murderous hermits rolling around in steam punk, Burning Man, bicycle gear wheelchairs. Special thanks to 1976 Primetime Emmy Award winner Fionnula Flanagan; if there were an Oscar for best psycho mom and chain driven chair combination, she would have it. Do not expect a flash of brilliance in this one, and watch out for those carpenter ants.