Writer/director Julia Ducournau’s debut feature “Raw” took home the FIPRESCI international critics’ award at Cannes this year and the it was well-deserved. Building on a small and well-used horror trope, the movie expands the envelope of in-your-face splatter film making while still leaving room for a darkly comic “what’s a cannibal to do?” dialogue. 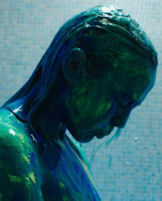 Garance Marillier does most of the heavy lifting (heavy eating?) as veterinary school freshmen Justine. Like most parents, hers are reticent about just dropping the 16-year-old outside the college and driving away. Nonetheless, the time has come and off they drive. Luckily, Justine has the support of her older sister Alexia (Ella Rumpf) who is already a student there.

In the opening scenes of the movie, we find out that everyone in Justine’s family is vegetarian. Stridently vegetarian it seems. Also, everyone is a veterinarian. An odd combination, but nothing to write home about. In the first days of the life at the raucous college, Justine is exposed to bizarre hazing rituals involving raw meat. Disgusted at first, there is a glimmer of recognition that flashes from the screen. There is something familiar about farm animals’ entrails. Who would not identify with that? Well, anybody familiar with blood oozing horror splatter flicks would certainly see the signs.

Thus the ride begins into a strange new world where people are, well, different. How different they are, and how many of them are different, is dangled before our eyes by film maker Ducournau. Like normal people who have been bitten by zombies, it is just a matter of time.

Justine’s gay roommate and only friend, Adrien (Rabah Nait Oufella), helps flesh out the story by being the eye-witness to Justine’s unraveling. Perhaps, the tearing apart the raw chicken breast was just a pot stimulated food trip (who has not done that after some good Panama Red?). Without further ado, Adrian learns that with some people, even best friends, it is best to keep your body parts to yourself.

The cinematography is excellent, framing the most grotesque shots imaginable within the prosaic confines of college walls. Dropping the two most unusual girls into a scene otherwise filled with the most predictable of people, college kids, sets the stage for a darkly funny comedy of manners. There are the awakenings. Justine’s awkward sexual awakening is contrasted with her even more awkward dietary development. Adrian’s self-confident gayness matches Justine’s older sister Alexia’s brashness, and Ducournau uses Alexia to foreshadow the new Justine.

In the end, the family is forced to admit that the girls are a handful. But then, life is not always easy, especially when teens are at that difficult age. Hormonal changes leading to abrupt sexual urges, getting too close to strangers, taking bites out of strangers. All part of college life, an extended childhood of sorts, nurtured by mutual understanding and, one assumes, a tolerant school administration. “Fast Times at Ridgemont High” has nothing over this yarn.