When The National Enquirer founder Generoso Pope Jr. hit upon the journalistic idea of the century he thought he had a good thing. The trick was a two-pronged attack to give readers what they wanted, Olympian size schadenfreude, and put the paper where they could see it, at the supermarket check-out stand. It turns out he was wrong, he did not just have a good thing, he had the key to a champagne lifestyle on a beer brain. Three decades later, Donald Trump agreed, and the rest is history.

Director Mark Landsman puts together a fascinating assemblage of the most memorable headlines in America. Of course, we remember them. What else did we have to look at while waiting in endless checkout lines while the cashier did a price check on chopped liver? Most of the story you already know, and that is what takes this movie well out of the ten-out-of-ten rating range. The nostalgia is not really there, either, since most of the news stories were not that interesting in the first place.

Having said that, a couple gems stand out that make the flick worth seeing. As the movie tells it, the paper would use its considerable investigative resources (bribery) to get the dirt on a celebrity. The editor would then tell the victim they were going to publish and ask for comments. They also they would hold the story in exchange for several more normal interviews. Search, extort and prosper.

That cred was cracked a little when, in a few cases, the Enquirer actually performed cracker-jack investigative reporting. In the OJ Simpson case they beat the FBI to the proof that OJ owned the mysterious “bloody footprint” shoes. At Elvis’ funeral they bribed a drunken priest to take the coffin shot with a camera hidden in his robe. Wait a minute, that was not an investigation. Oh well, sometimes they all just run together. That issue sold seven million copies.

There was only one person they did not have to pay for tips, current president Donald Trump. As the film reports it, he actually phoned in paparazzi alerts on himself. He would disguise his voice and call in the tip about him and a couple glamourous women, cat-fighting for his affections, being at a certain place at a certain time. They would show up, bask in the flash bulbs and wait for the pics to roll out in the next edition.

When his friend bought the mag, Trump thought he had the goose that laid the golden eggs. His incompetent lacky gave it the story of its lifetime; bankruptcy. For some, the best example of bad journalism in the modern world had ended. For others, the hilarious headlines that were the high point of any cheap shopping trip were no more.

Even if you never bought an issue, see this fond farewell to fish wrap. It was a piece of work. 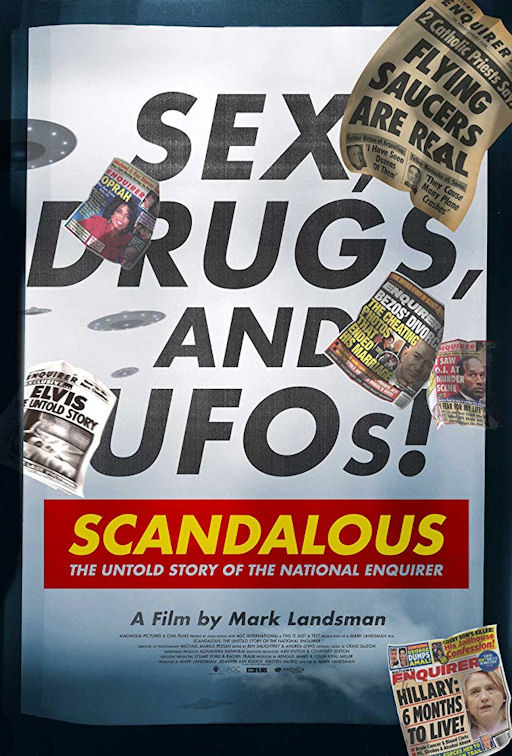