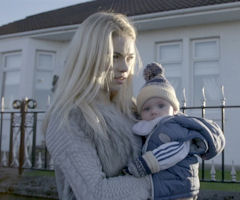 It does not matter where the steel went, England or China. What is left in Motherwell Scotland is a regiment of left-behinds who have no future, and they do not even know it. A documentary almost without hope, the protagonist Gemma, a child growing into a woman, suffers more heartbreak in her first five years of adulthood than most see in a lifetime. There is little to compensate except that she and her child are alive. Alive and coping.

As Gemma puts it, scheme housing is not any special kind of place. It just is a place. A setting as stark as any desert, the cement and packed dirt courtyards are emphasized by the film’s silent soundtrack. If lacking in perspective, Gemma’s never seen anything else. Nor is she likely to without a major life change, times even tougher than they are now and an impossible amount of luck. The solution is always the same—alcohol, light drugs and then on to heavy drugs. A series of temporary fixes that lead to permanent physical and emotional scars that ensure the status quo.

She doesn’t get luck and she does not get change, except for a man who was so severely beaten he has, literally, half a head. A documentary that has horror edge and sharp as any zombie movie, this movie tells it like it is. In what is usually termed access, writer/directors Ellen Fiske and Ellinor Hallin do not just share the lives of the subjects, they share their souls. There are no sets except the halls, apartments, stairways, roofs, dead stomped down grass and cheap, cracked concrete.

At any given time half are wondering why they are there and the other half are trying to figure how to get out. Scott is introduced early on. A likeable enough kid, a nearly unbelievable crime shows a side we wish we had not seen. Gemma’s boyfriend, and the father of her child, is in a wheelchair for life. With major skull and brain injuries, skull deformation shown in numerous scenes from all angles, he has seen a person’s worst side.

We all have the potential for that side, given years without the privilege of dreams. Large scale planned housing, a prison with socio-economic walls instead of concrete, is a place to escape from rather than grow out of. The residents have only vague ideas about why they are there. Industry went away, education went away, money went away and drugs came in. A puzzle to be sure, is the task of getting out. Even worse, this must be preceded by a goal to get out. Barely surviving, society has brain washed the residents into not being sure they care.

By the end of the movie, Gemma has not divulged any secrets. Her grandfather raises her most of the time and spends the rest of his time on his champion carrier pigeons. They are transported and released hundreds of miles away and always return home. Grandfather has perversely embraced the principle of the scheme projects—they can be taught to never leave. If they try, they will return. A solar black hole of infinite social gravity. Without films like this, not even light can escape. 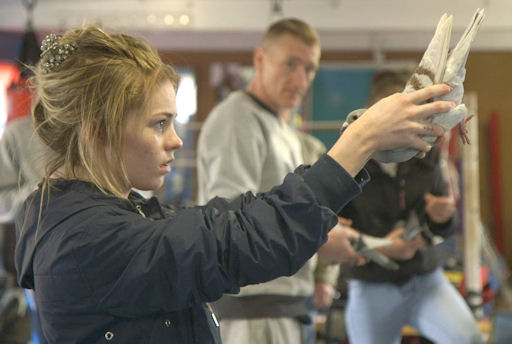