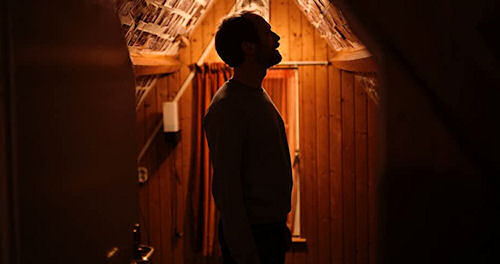 Bjorn, Louise, and their little girl, Agnes, are on vacation in Italy, enjoying the sites and the company of other vacationers. Among those they meet are a Dutch couple — Patrick, Karin, and their little partially mute son, Abel. Abel and Agnes are of similar age and their parents form a pleasant bond of the sort you do when meeting similar people when on a holiday. Bjorn and Louise are gentle, loving people, vegetarians, doting parents, who are eager to get along with others. To be brusk, to offend, to resist through violence; these things are not in their nature. This is true of many people in real life.

Some time after returning home to Denmark, Bjorn receives a surprise invitation from Patrick to come to their country home in Holland and spend a week with them. Louise is at first wary, but Bjorn is eager and eventually they all agree to drive the eight hours from Copenhagen to rural Holland.

When they arrive, they discover that Patrick and Karin are not the people they seemed to be back in Tuscany.

Writer/director Christian Tafdrop (“Parents”) presents us with a fable for modern times. What happens when the gentle, naive fly wanders into the spider’s web? What of Little Red Riding Hood, lulled into trust by the grandma’s answer to her first two statements, only to be struck with terror by the third when it is too late*? What happens to a nation, beguiled into acceptance by a demagogue’s words of affirmation, when all ends in dictatorship?

The tension in this tale is expertly wrought and, like the spring of a clock, tightens twist by twist until …

Performances are believable and, in the case of the Hollanders disturbingly so. Cinematography captures the claustrophobic sense of doom pressing in, even in wide open spaces. Editing is also top notch. I wish I could say the same for sound. The film opens with crashing, discordant “noise” that is totally out of place with the actions on the screen. Whether the idea was to warn of impending events, even before they begin to unfold, or simply the result of an error in taste, it is highly inappropriate and off-putting. And since it is at the very beginning of the film, it detracts from the production.

This film has strong horrific content during the last minutes and will not be for everyone. However, it is worth sitting through if only to realize that the price of “get along, go along” may some day be far more than you are willing to pay.