Emerging director Sam Fleischner is able to put his dozen-plus lenser creds to good use in this surrealistic yet grounded narrative of a boy lost in the New York subways. Winner of a Special Jury Mention for Best Narrative Feature at the 2013 Tribeca Film Festival, this film takes crafty advantage of a bowl of lemons and turns it into delicious lemonade. 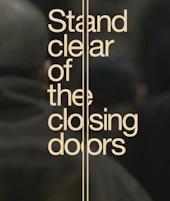 The lemons came in the form of super-storm Sandy, which hit the location like a sock in the jaw just as the film was nearing completion. Asperger’s Syndrome sufferer Ricky (Jesus Sanchez-Velez) has spent several days riding the rails of New York City’s fabled and fearsome MTA subway system. Somehow remaining unnoticed even in the midst of a massive manhunt for the missing boy, Ricky is kicked off the subway when it shuts down due to the hurricane force winds of Sandy.

For autistic spectrum children, there is no such thing as a good day at school. Faced with distasteful medicine which he has to take every day, and a sister Carla (Azul Zorrilla) who loves him and hates him at the same time, Ricky runs away and seeks refuge in the noisy light show of noir adventure of the trains. Although Ricky has almost no money (and eats almost nothing during his several days on the trains), he is able to ride indefinitely by transferring trains. On the MTA, there is a single charge to get on, no charge to get off and no charge to transfer. With 468 stations and 232 miles of routes, if a person wants to get lost and stay lost in the subway, they can.

Ricky’s mother Marian (Andrea Suarez Paz) is panic stricken when she learns he has disappeared. She blames Carla, who is frustrated to the hilt with a little brother who never gets close to normal behavior. Marian has kicked her husband out of the house and in so doing has incurred Carla’s wrath. With Ricky’s disappearance, the family is forced to take a closer look at itself and consider a truce to bring back the child that has a piece of each of their hearts.

This movie is an unmatched combination of an insider’s view of the true, unvarnished underbelly of the largest city in America and a gritty essay on the nearly impossible task facing an undocumented Mexican family raising an autistic child. The first half of the film contains the most realistic and authentic footage ever shot on the NYC subway. These are the real people of New York, the people living outside Manhattan. The Garcia’s home is in the Rockaways, a sand spit completely exposed to the landfall of hurricane Sandy, just south of JFK airport. Once a middle class enclave, the area was largely given over to projects in the last half of the 1900s.

Knowing Ricky sometimes hid out under the boardwalk on the beach, Marian goes to look for him there. Hiding in the dark, a troll-like hominoid expectorates his response to her pleas with a hissing “No!” Meanwhile, Ricky is dropping further into the miasma of the faceless, nameless and futureless souls packing the cars of the MTA. The lights, the thunder, the clatter and, above all, the utter blackness of the ageless tunnels fascinate his, as they have fascinated imaginative persons for a hundred years.

Ricky’s father is partying when he gets the call. “No, don’t call the police’ is the only advice he can give. In the community of illegal aliens, a family has to make, and live by, its own laws. The police come to visit. They do not try to deport anyone, but they are of little help. They know searching for a silent little boy in Gotham is like searching for a needle without even knowing the location of the haystack.

The train ride takes on a life of its own. There are the dancing street boys, the lunatic arguments and endless, senseless, pointless chatter that makes up the day of the terminally anxious condemned to the dirt, noise and private desperation of life in the big city without the possibility of refuge. Seeing a fellow outcast in Ricky (or perhaps a potential victim), an old man gives him a banana, priceless sustenance. Perhaps he, too, suffered from an autistic disability that forced him out of school at too early an age. Friends appear out of the neighborhood to help. Friends from the most unlikely of places; the athletic shoe store, the school Ricky hates.

The early subway scenes show all of the familiar stops, 42nd Street, Columbus Circle. As the film goes on and Ricky loses consciousness and what little connection he has with the outside world, the stops cease to have names. They merge into one tiled, hard-edged room, doors chained closed with ridiculously heavy chain and no food, water or sanitary facilities.

Early Halloween revelers fill the train over the last weekend of October, 2012. In Ricky’s disoriented haze they appear ghoulish monsters populating his thundering, shaking and spasmodic world. Ricky is spotted, and then lost. His family grapples with choices of Arrest and deportation versus a sliver of a chance of finding Ricky with an all-out search, if the authorities would be remotely likely to order such a search for a poor, illegal Mexican alien.

Superstorm Sandy hits and the sounds of the breakers smashing the boardwalks above echo into the flooded sloshing, gurgling sounds of the water slowly filling the subway. “Stand Clear of the Closing Doors” read the subway signs, but this family is not ready to close the doors without a fight. 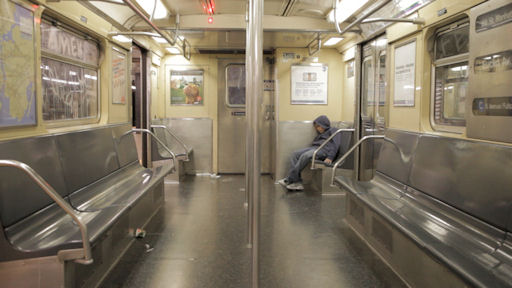