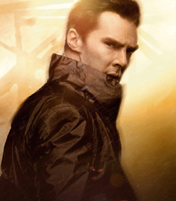 It has been four years since J.J. Abrams “Star Trek” debuted and the eventual sequel to the hit has finally landed in theaters. “Star Trek Into Darkness” is using the same hit formula that worked for the franchise’s reboot, as well as adding a multitude of new cast members, villains, bigger action and many brushes with danger.

The reboot that pleased long-time fans as well as created a legion of new ones strikes intergalactic gold with a sequel that lives up to the hype and hopes we had for it and is an amazingly fun movie to watch.

“Star Trek Into Darkness” takes us back onto the bridge of the USS Enterprise where Captain Kirk (Chris Pine), first officer Spock (Zachary Quinto) and the rest of the crew are off exploring and observing new and uncharted space. When a mission doesn’t go as planned, and Kirk disobeys a prime directive of the mission, he is demoted and his old friend Captain Pike (Bruce Greenwood) takes over the Enterprise once again.

When ex-Starfleet Commander John Harrison (Benedict Cumberbatch) begins a series of terrorist attacks, a war council is convened to stop him. With many of his commanding officers and mentors killed during the attack, Kirk takes it upon himself and his crew to track down Harrison and bring him to justice. Things aren’t always as they appear and Harrison’s attack may not have been unprovoked after all.

I will start off by saying that I was not a “Trekkie” — or even a fan of the Star Trek franchise — until the 2009 film. I grew up watching random episodes from different seasons of the series that has run since the mid 1960s, but I never really felt connected to the story. These new films are fast paced, energetic, funny and incredibly entertaining to watch.

Although I will not say that “Star Trek Into Darkness” is better than the original — I think the stakes in the first story were larger in scale — I was happy to find out that the movie was all I expected and more. Were there plot holes or a couple of confusing aspects? Sure, but there was nothing that could be considered a detriment my enjoyment of this summer popcorn flick.

As usual, the major draw for these types of films are the actors, the witty dialogue, cool space action and, of course, the various alien races and planets they visit and explore. There was major secrecy surrounding this project and various questions arose about the storyline and new characters, but in an effort to be spoiler free I won’t get into them. I will say that Benedict Cumberbatch completely stole the show. The acting in the film is top notch all around and every returning character stepped up their game and gave better performances this second time around — but Cumberbatch was riveting to watch. Everything from his slick cold demeanor to the baritone voice in which he speaks and the anger bubbling right beneath the surface at all times made him one of the best Star Trek villains I have ever seen.

Just as we saw in “Star Trek,” the Kirk and Spock relationship is delved deeper into as this film progresses and is complicated by Spock’s choice to turn off his emotions when things get tough. His relationship with Uhura (Zoe Saldana) is further complicated by this turn of events as well, but even in the midst of these complicated and perilous situations, the love these characters have for each other shines through. 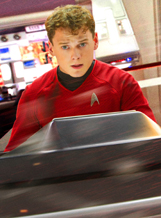 The secondary crew members of Chekov (Anton Yelchin), Bones (Karl Urban), Scotty (Simon Pegg) and Sulu (John Cho) all get some adequate screen time and we get to know each of them better as well. My personal favorites would be Bones and Scotty, as they are the concentrated comedic centerpiece for the film. Also there are notable first appearances for new characters played by Alice Eve, Peter Weller and Noel Clarke.

The addition of 3D made the action bigger and more in your face than ever before and the effects and look of the film are phenomenal. The movie cost more than $180 million to make and you see every cent of it on the screen.

The bottom line is that “Star Trek Into Darkness” is a great big action comedy that everyone from lifelong fans to those joining for the first time can follow along and enjoy. The action is bigger and the villains are better than before and it would be nearly impossible to watch this movie and not be on the edge of your seat either in anticipation, or with laughter.

This movie has something for everyone and below the surface of big budget special effects and jokes, there is a big heart and there are emotional moments in the film that really connect with the audience. I would suggest that you see the film on the largest screen you can — IMAX if available and in 3D if you want to.

“Star Trek Into Darkness” is an adventure not to be missed on the big screen and I hope that we will be seeing a third installment in the J.J. Abrams franchise in the near future.

“Star Trek into Darkness” is in theaters now and is rated PG-13 for intense sequences of sci-fi violence and action.