Noir is difficult. And as of his second feature, director Jamie M. Dagg has a way to go. It is not enough to create a mystery thriller with a decent plot, there must be back stories. Without briefly dishing the dirt about why these lost souls inhabit the noir world, we have Clint Eastwood keeping shop and cleaning swimming pools. 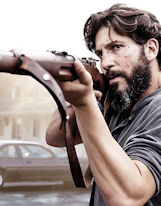 Jon Bernthal plays ex-rodeo star Sam, relocated to the forbidding mountains of the northwest. Running away from his native Virginia, he left behind a mysteriously absent daughter and brought a broken body, a broken heart and a barely surviving soul. The one-dimensional nature of Bernthal’s performance is not all his fault. Most of the blame goes to weak directing by Dagg and a simplistic screenplay by Benjamin and Paul China. As a debut screenplay by the twins, it is a commendable effort but there is far to go.

The title of the movie itself is off-putting. There is little “sweet” or “Virginia” about the story. The setting is the wet, foggy Northwest Coast, perhaps Alaska. An excellent location for the dark, miasma suffused story line. A better title would have leveraged that and given the audience notice that rain-soaked dreariness was about to unfold into bitter violence. The opening scenes are excellent, as we are introduced to a trio of the small town’s nocturnal drinking gamblers, playing cards in the darkness after hours when the world is shut out. We are also introduced to mysterious psycho Elwood, in an excellent portrayal by Christopher Abbott.

Elwood and Lila (Imogen Poots) become the heart of the plot, marooning Bernthal’s Sam to a supporting role that later emerges as a hero. Fuzzy and half-formed, these characters have greatness rattling inside them. A wonderful telephone conversation between Elwood and his mother, far away, who may not even exist, nods to Anthony Perkins in “Psycho.” That could have been developed to luscious effect, but did not happen.

Lila is presented as the typical small town abused Barbie Doll, and the audience is expected to fill in the blanks. She describes hubby as a “monster,” another kernel undeveloped. Instead, too much screen time is spent on Sam, who is covered with so much facial hair there is little telling how he is acting. His beard hides him from his past, but his rodeo jersey hanging in the lobby broadcasts his past, anyway. A clean-shaven Sam would have been more expressive and dropping the jersey would let that past come out more slowly, and painfully. Not everybody in the Northwest has a full beard.

Music by Brooke and Will Blair is overly ominous and transmits a message more of impending bludgeoning by sound than emergence of dark secrets. It is generic horror show music, the music that comes just before the car goes over the cliff or the ax murderer stands over his victim. A more sophisticated soundtrack that says, “Everything is OK for now, but just wait…” could have been used to leverage the dripping pine fronds into the existential hades of the desolate small town.

More to come from this cast and crew. 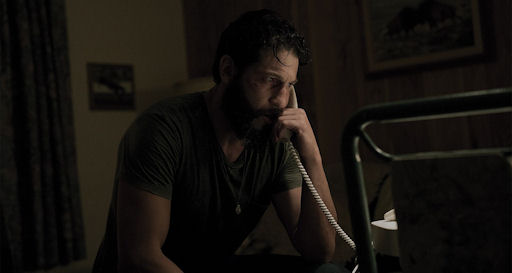