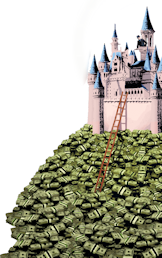 Oh, how I love Abigail Disney’s films! She has an expectation for a better world and has constructive ways about how to get there “with a little courage and imagination.” She opens “The American Dream and Other Fairy Tales” by comparing the dynamics of wealth to addiction. “I’m sorry this is radical,” she says. “Too much money. There is such a thing.”

Abigail Disney, the grand-daughter of Roy Disney, Walt’s brother and co-founder of Disneyland, is a radically good person. She is also a philanthropist, social activist and film producer with a doctorate in philosophy from Columbia University. Including the transformative “Pray the Devil Back to Hell,” her films focus on what is right and how to get there.

In “Pray the Devil Back to Hell” she shows how Leymah Gbowee, founder and executive director of the Liberian Mass Action for Peace, helped organize a successful women’s strike which entailed refusing to have sex with their husbands until they stopped fighting. This helped Ellen Johnson Sirleaf become the first female head of state on the continent of Africa. That’s just one example of radical.

One day, Abigail received a message from Ralph who worked at Anaheim’s Disneyland. He and his fellow “cast members,” as Disney employees are called, were fighting for better pay and he was asking Abigail for help. Even though she lives in NYC and has no role in the company, she felt like she felt she needed to investigate.

She learned that the workers at Disneyland, who were providing a dreamlike environment for visitors, were being paid under $15/hour and could not afford housing in the greater Anaheim area. Some lived out of their cars, one family was camping, and others still lived with their parents. The workers’ union provided a food pantry and gave each worker a bag of groceries one day a month.

In 2021, during the pandemic when Disneyland shut down, Bob Iger, Disney CEO at the time, made $46.9 million (albeit because of Disney’s film success).

Abigail asserts that Disney is Ground Zero for income inequality. There is an American corporate belief in a “trickle down economy.” In this system, if Disney did well then Anaheim would do well. But Abigail notes that the city is in fact struggling. There are gang problems and the infrastructure needs updating. Unfortunately, the only investments occur in the Disney part of town. The rest is run-down.

Anaheim City Councilmember Jose Moreno reveals that the city took on a bond in 1996 to build a parking lot for the Disney Resort. They lease it to Disney for $1 a year and Disney earns $65 million a year from it.

Throughout the film, Abigail points out that Disney is simply an example of what has gone wrong in corporate America. The Disney CEO is earning at least 600 times a year more than the lowest-paid employee. Back in her grandfather’s time, Walt and Roy made 78 times more. The focus now, throughout most of corporate America, is on more money for the richest and not taking care of all the people making the companies thrive.

In the film Disney says, “Our original economic model was stolen land, stolen people and stolen labor. White men were at top of the hierarchy. Our founding myth was that some groups of people are better than others.”

In a recent NPR interview (Sept. 24, 2022), Disney argues that too many of Disney’s “workers just cannot make ends meet, that the company’s own policies and practices, including vast disparities between executive and worker pay and aggressive lobbying for municipal tax breaks and other publicly funded benefits contributes to – bluntly – degradation and despair for the people who make the Disney experience magical for others.”

Abigail has written a letter to both Bob Iger and the recent new Disney CEO, Bob Chapek, telling them that this film was made for them and Wall Street and all the people running corporations.

In the credits, there is a note that there are plans to raise the base pay for Disneyland workers to $18.50/hr.

I doubt that is enough. When I took my kids to DisneyLand and a few years later to DisneyWorld, we got first-rate never-to-be-forgotten dream experiences. The employees there gave this to us. Chapek is now making $32.5 million a year. In my radical thinking, it seems to me that Bob and the other Disney executives could curb their addiction for huge sums of money and pay the people who make dreams come true a real living wage.