Review: The Ants and the Grasshopper 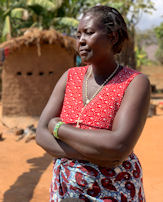 “The Ants and the Grasshopper” is a documentary that will appear at the “EarthX Film Festival in mid-May in Dallas, Texas. The festival’s mission is to “bring awareness of the environmental crisis in order to create sincere action on both an individual and communal scale; to inspire local and global change on how we as humans affect our home planet and our fellow beings.” This film certainly exemplifies that mission.

The story begins in the small Malawi, Africa, village of Bwabwa. We meet Anita Chitaya, an exceptional woman and a leader for change in her village.
Anita and her husband, Christopher, farm one acre where they grow cassava, beans, corn and pumpkins using traditional, low impact methods that enrich the soil. Corn stalks feed their little herd of pigs. Anita has encouraged her husband to be a full partner in the family, sharing all the work involved. Her son is being raised in the same way. This flies in the face of Malawi tradition where the women do most of the work and the husbands are often layabouts.

Anita spreads the word about sustainable farming and the rights of women, but does it in a way that is instructive, not belittling or demanding. She deals with issues head-on, “If you want someone to change, you go to their doorstep with your problem.”

But things are getting harder for everyone in Malawi. Rain is rare, and when it come it comes in torrents. The Rukuru River dries up, the wells fail. Women are shown digging into the river bed to tap water feet below the surface.

The documentarians encouraged Anita and a friend to take their concerns about climate change and its effect on Malawi to the United States, historically the greatest contributor to global climate change.

First they visited a Midwest dairy farm, a traditional farm, and organic farms. Some of these farms are hundreds, even thousands of times the size of Anita’s single acre. And while some of the farmers are aware of climate change and are adjusting, others, especially those who expressed strong belief in God, were not. They believed that it was part of God’s plan, that God would come to their rescue, or that it just didn’t exist. Therefore they saw no reason to upset their lives and practices.

Then they went to Oakland, California, where they saw the homeless in their tents – people who were too often the same color as Malawians. But they also visited the People’s Kitchen Collective, which serves the community healthy food following the example of the Black Panthers in their outreach to people in need.

Then on to Detroit to look at sustainable urban farming.

Lastly, they visited Washington D.C. They’d heard about President Trump and didn’t know what to expect. They got virtually nothing, seeing no American official, and only the staff of Oregon Senator Jeff Merkley. However, they did impress the staff with their message.

Finally they returned to Malawi, where they discovered all was not in vain. Things were changing for the better in their village. As time went on, Sen. Merkley joined others in endorsing the Green New Deal legislation, which may one day provide money to reverse climate damage. Some of the American farmers they’d met in the Midwest realized the truth of what they’d discussed with Anita and friend and were changing their ways. Not all, but some. Little steps through understanding each other’s problems.

This is a documentary that shows us how our neighbors, friends, and we ourselves can make small changes, encourage others to follow, and eventually, perhaps, change the future of our species.

There is nothing to say about the acting in this film – after all, these are the real people dealing with their real situations. However the directors, Raj Patel and Zak Piper, have captured the joy of life celebrated by the Malawis with their simpler approach to what is needed for happiness. The cinematography by Clare Major and Peter Mazunda is gorgeous, and places the parched land of Malawi in stark contrast with the (still) lush green lands of agricultural America.

“The Ants and the Grasshopper” is highly recommended. As to the meaning of the title, watch the film. It’s not what you think.