Review: The Blood of Wolves

There is hot water in Hiroshima as maverick cop Ogami does it his way. A firm believer in tit for tat, Ogami has seen the “Dirty Harry” movies and knows how to handle punks. Too bad for his young sidekick Hioka, he handles college grad rookies the same way. Set them up, knock them down and use them for the next hit. His brutally truthful convictions and resulting scofflaw execution tie him to society’s whipping post as he slowly self-destructs, taking others with him. 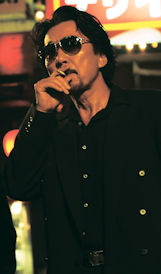 Running through July 15, the 17th New York Asian Film Festival, sponsored by the Film Society of Lincoln Center and Subway Cinema, presents the North American premier of “The Blood of Wolves,” a simmering noir cop thriller.

Noir superstar Koji Yakusho plays Shogo Ogami, a dirty cop doing a dirty job. He does not know who he hates worse, the yakuza or himself, so he kills a little bit of himself as he whittles away at the seemingly endless parade of thuggish criminals that populate his beat. Hiroshima is choked with yakuza and if you loved the punks in Mr. Eastwood’s cop flicks, you will love these slavering psychos. Five dimensions of edgy framed in wall-to-wall neon. The dangerous dames, the good-hearted hookers and the innocents doomed to lose their innocence.

New partner, Hioka, fresh out of Hiroshima U. with a degree in punk babying, has a lot to learn. The first thing he learns is how to be used by Ogami as he sets him up to brutally violate the law on his first day. The lesson is never trust anybody. Not your partner, your boss, or any dame that says she loves you. In this story of self-doubt, self-loathing and marginal vindication, director Kazuya Shiraishi takes his “Twisted Justice” theme of the good cop going rogue into stickier territory. It is not just the cop who explodes into moral shrapnel, it is society at large. As bad as Ogami is, it gets worse. Our system of ethics, morality and rationality is a thinly veiled excuse for preaching one set of rules while living by another. This cop does the same thing, only in reverse and wearing a badge. The gangs kill each other but the professional working class, including the unfortunate accountant in the opening scenes, is in it up to its ears.

Unfortunately, after the first hour or so we want to see some dimension in protagonist Ogami and his sidekick. Shiraishi can mix in a funny scene of marital discord (the infuriated wife with the shotgun nods to Carrie Fisher as Blues Brother Jake’s scorned betrothed), but scenes of comic relief are too few and far between. It would have been a better movie if the director had dug more of those scenes out of Yuko Yuzuki’s novel.

The movie is blessedly light on martial arts, gun fights and car chases, advancing well beyond the mediocre yakuza fight film. The cinematography is lean and mean and the sound track is non-existent. This is a story of a man’s soul and you, the viewer, are expected to stick to that. 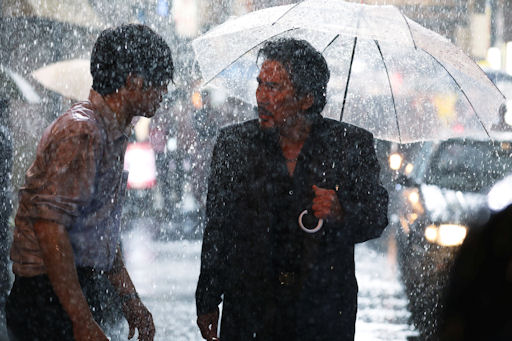