On the plus side, the trailer for this film is phenomenal. Black-marked and wild, unleashed and regal, like a graceful long-legged dog, the sleek cat leads its owner into a black Lamborghini. Taking the passenger seat, the cheetah hears the sportscar roar onto the road with his calm, darkly handsome master at the wheel. 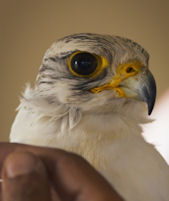 This is a vanity project, a slow documentary about wealthy Qatari sheikhs who practice falconry out in the arid sand desert. They camp out under stadium lights and a grand canopy with a meaty feast, bonfire and cushioned luxury. A gigantic festival tv tracks the birds as they race after released pigeons.

It is exquisitely filmed with sunrises, sunsets, mists of sand smoke and darting birds. Sometimes a falcon wears a camera so its chase for the pigeon is intimately framed.

But on the minus side, this is indeed a vanity project. By definition, Yuri Ancarani’s film is an exercise in exaggerating his palette, in what he can do as a video artist with little story, little message, and a monochrome setting.

Where and why the cheetah figures in the vehicle and later in a sitting room with the handsome sheikh is never explained. The whirling motion of the falcons in a large gymnasium goes on far too long and the rules and outcome of the extravagant falconry event are obscure.

The trailer promises what the film does not deliver: excitement, risk and tension. But what “The Challenge” does offer is artistic beauty, a slice of Qatari culture and an example of what music can do to an otherwise quiet offering.

“The Challenge” is being featured at the Howard Gilman Theater at the Lincoln Center in NYC on Sept. 8 and 9, 2017.