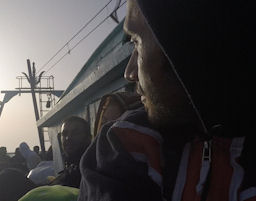 George Kurian, a documentary filmmaker and photojournalist based in Istanbul, was covering the war in Syria when he decided to document a group of Syrians on their risky defection to the west.

The clandestine sea voyage from Syria to Egypt is illegal because Syria won’t update passports and destination countries won’t issue visas. Therefore, every step is risky with the threat of prison heavy in the air.

After arriving and living illegally in Egypt for some amount of time, the Syrian group heads off in a canvas draped vehicle for a stretch of beach routinely scrutinized by Egyptian patrols. The Syrians remark that it is ironic that Egypt doesn’t want them to enter, and then scouts the coast to arrest them if they try to leave.

They think they are lucky when they are successfully smuggled aboard a lousy excuse for a boat and set off for Libya. It soon becomes apparent that the guys managing the boat have no clue about navigation. For seven days, with Libya right next door to Egypt, they chug along with no land in sight. They run out of water and must use the boat’s radiator fluid. Each morning they find themselves waking up in a warm bath of urine, shit and vomit.

I wonder what Kurian and Rami, a member of the Syrian defectors, were thinking – fabulous footage for their documentary project or not worth the dehumanization and fear of imminent death? Sources claim it was Rami who filmed the sea odyssey. I’m not sure if Kurian, the filmmaker, was with him or not, but the making of the first part of the film must have reached new levels of revulsion and despair for all involved.

What becomes of this once excited band of Syrians is the second half of the story. While they are smart people, speaking pretty good English, they are headed for challenges that make them question their identity and their decision to ever leave their homeland.

“The Crossing” is one of the films this year being shown at The Human Rights Watch Film Festival, June 10 to 19, 2016 in New York City. Each film is related to the challenges of defending human rights. The festival is co-presented by the Film Society of Lincoln Center and IFC Center. Schedule and ticket info: ff.hrw.org/new-york.