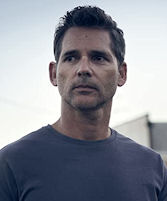 Personal crisis in the context of climate crisis is a winning combination these days. There is something about the world burning up that reflects the burning of the soul, a land laid waste and a spirit destroyed in the wake of deception and betrayal. Although this has been done before, the present plague of Australian bush fires makes for a vibrant back drop for murderous history that may be too far gone for redemption.

Eric Bana plays Aaron Falk, small town kid from southeastern Australia, grown up to be federal agent and coming home for a funeral. A simmering start for a pot boiling series of twists that turns “Peyton Place” into “Chinatown.” The heat got to Aaron’s teenage buddy Luke who killed his wife and son before turning the shotgun on himself. It is a bitter turn of events, as most thought Aaron better fitted to such a heinous end since he disappeared a couple decades earlier at the same time Luke’s girlfriend Ellie was found drowned in the local swimming hole.

Flashbacks are critical to director Robert Connolly’s retelling of the novel by Jane Harper. The screenplay by Harry Cripps and Robert Connolly doubles down on the juxtaposition of skeletons in the closet and swimming holes burned dry by global warming. Meandering rivers that once were playgrounds for carefree, if restless, youth are now snaking brown skeletons, cracked backbones of the parched corpse of a once lush and blooming habitat.

The spirits have come home to roost and the people of Kiewarra respond accordingly, their combined guilt infusing a berserk bile into everything they say and do since it seems no one is completely above the lies that underpin and eventually connect the two horrific killings. There was grave injustice done here in this Aussie version of the High Plains Drifter’s Lago. If Bana is no Clint Eastwood, he comes close enough.

Backing up the captivating cinematography is Peter Raeburn’s brooding soundtrack of strings and subdued horns. The swimming hole is placed next to foreboding boulders that are right out of Peter Weir’s “Picnic at Hanging Rock” and Raeburn ratchets up the tension with music every bit as haunting as Gheorghe Zamfir’s pan flute in Hanging Rock.”

The stellar supporting cast nails the key components of small town citizenry on their way to terminal despair. Bruce Spence almost steals the show as Luke’s devastated father Gerry, grandfather of Luke’s two murdered children. Together with Julia Blake, as wife Barb, they form a chorus of grief suitable for a small town, and a family, blowing away in the scorching wind. William Zappa takes the best actor award in this movie as Mal Deacon, a father apparently driven insane by the death of his daughter, Ellie. Sidekick Matt Nable, as Grant Dow, barely comes in second. And John Polson, perfect as clerk Scott Whitlam, is a newcomer misplaced in the a village who has no future.

A strong and enthralling movie with twists all the way down. If you like this Aussie thriller, check out the Edgerton brothers debut feature “The Square,” another great and gritty Aussie thriller complete with overheated Christmas.