A slim man with short dark hair agilely steps off a train in steamy cold Estonia, looking furtively at army officials hobnobbing outside the station. He puts up his collar to shield himself from the cold in a way that lets you know, he prefers not to be seen. He heads for his appointment where he is hired as a gym teacher using a pseudonym, Endel Nelis. It is his students, like the youth of Estonia, who will ultimately change him and their country forever.

Like the thin, wary teacher, Estonia, after WWII, was just trying to survive. During the war she was occupied by Germany. All her healthy young men were conscripted by the Nazis, the No. 1 enemy of Stalin’s Soviet Union. After the war, Russia overtook Estonia as part of the spoils of war.

Stalin was a murderer so vicious and unstable that he killed more of his own people than Hitler killed in the Holocaust. He wanted to punish the Estonians who had joined the German army, even though they had had no choice. When the war ended, names were changed and hometowns struggled. The majority in Endel’s classes were orphans.

Endel Nelis, reticent, reserved, quiet and initially uncomfortable around both the children and his fellow faculty members, is under the eye of the principal, who suspects he has something to hide. Research is conducted. In the meantime, a best friend warns of danger and offers an escape.

The problem is that Nelis, a world-class fencer, has taught his students, both boys and girls, his tricks and they have become surprisingly good in a very short time. Also, Nelis has fallen in love with a fellow teacher.

Should he take the offer to escape, to erase his past and forget his mastery of the sword and blend into the vast interior, or take responsibility for his past and suffer discovery and the dire punishment that is sure to come?

The true story of the gym teacher, Endel Keller, aka Endel Nelis, is similar to the story of Estonia and its suffering before eventual independence. It is also the grand masterpiece of Klaus Härö, a winner of more than 60 film awards.

Gracefully, insightfully and delicately scripted, acted, directed and filmed, “The Fencer,” with a score that propels the story, was submitted by Finland for consideration at the 2016 Academy Awards and is being released worldwide, opening in LA on Aug. 18, San Francisco on Aug. 25 and Seattle at SIFF on Sept. 8. 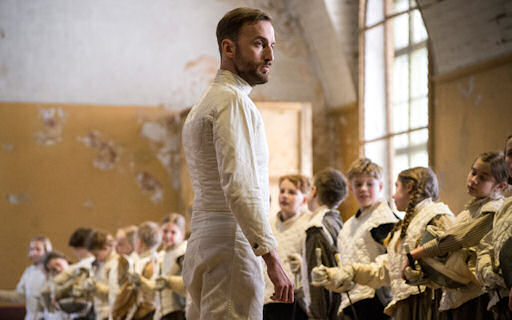