In “The Finest Hours,” Chris Pine does a fantastic job playing the sheepish, but inwardly courageous, Coast Guard Bosun’s Mate Bernard “Bernie” Webber, who is stationed in Chatham, Mass., on Cape Cod. Bernie is a good man, but is haunted by his failure to make it “over the bar” to save the crew of a stranded fishing boat a few years earlier. 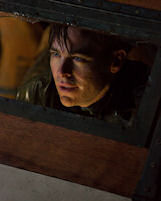 “The bar” plays a major role in the movie. A sand bar stretching across the bay, all boats leaving and returning must cross it. This is nothing in gentle weather. But when large ocean swells come in from sea, they break in the shallow water over the bar with crushing force. The scenes of the thirty-foot wood rescue boat surmounting the 50-foot waves breaking over the bar are unabashedly spectacular, especially in 3D. If you have a chance to see the film in that format, don’t miss it.

Eric Bana plays Daniel Cluff, the station commander. Cluff is from some place far away and is viewed with suspicion, if not downright derision, by the men he commands. Thus he and Webber are in the same boat, both suffer the barbs of their fellow seamen and must prove themselves far beyond what is expected of the others. Life sucks and then you drown.

In the background is Bernie’s impending marriage to the lovely Miriam (Holliday Grainger) who learns what many of the women of coastal Atlantic communities already know, when their loved ones go to sea there is always the chance they will not return.

The acting in the movie is only a little above average and there is little back-story or character development in the screenplay. The bucks in this flick went to the 3D special effects. With the best giant crashing wave imagery to date, better than even the hysterically overwrought “San Andreas,” it is hard to not believe what one is seeing. In 3D the wave is really that big and the boat is really that small. The sudden and shocking perspective of the giant oil tanker broken in two by the waves at sea is magnificent, better by far than anything seen in “Titanic,” or any other sea adventure film to date.

Casey Affleck and Ben Foster round out the supporting roles in the movie. They do good work with the limited lines they are given and the limited development of their characters. Affleck plays soft spoken engineer Ray Sybert who stars in all of the shots taken inside the stricken oil tanker. Even through broken in two, the stern half of the tanker manages to stay afloat, but the clock is ticking. In a well depicted stroke of engineering genius, Sybert jury-rigs a rudder control, starts the engines and heads what is left of the ship to shore.

The sequence of the repair weld breaking through the hull is another high point of the 3D production. It is hard to imagine anything more fearful than being trapped deep inside a huge ship that is being torn in two. Unless it is motoring over waves taller than sky scrapers. See it in 2D, you will not be sorry.