Natalie Dormer (“Game of Thrones,” “The Tudors” TV series) does most of the heavy lifting as Sara. In the opening scenes Sara’s sister Jess is having a tough time in a remote area of Japan’s forest at the base of Mt. Fuji. This is not hard to believe since the forest has been nicknamed the “suicide forest” since people go there when they need that extra push to end it all.

Jess is being assaulted by terrible monsters and is just about to fall into the black hole of the underground when … Sara wakes up. It was just a dream. And so we are led through a couple sequences where Sara dreams very bad things. These dream sequences weaken the film and should have been left out. Even so, the screenplay takes us on a wild ride with some suitably gory creatures and even a fall into the entrance to the Other Side.

The great twists in the screenplay are, unfortunately, often at the expense of the intrepid audience member who is trying to follow the plot. Rob and Aiden float in and out as Sara goes on her questionable quest. Everybody tells her not to go. But she goes, anyway, thank goodness, or where would we be? They also tell her if she goes, which is crazy, she should definitely “stay on the trail,” which is hilarious. There is no way she will stay on the trail. Another part of the screenplay that could have been left out. 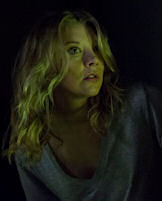 Of course, she will stray from the trail the moment she sees Jess’ tent, right there where she knew it would be. Then she is drawn into the nether regions of Mt. Fujidom.

Emerging talents Nick Antosca, Sarah Cornwell and Ben Ketai wrote the scary screenplay, which definitely could have lost a little weight in the editing room. Having said that, some of the sequences are priceless.

After arriving at the visitor center for the suicide forest, Sara tells the office staffer about her sister’s disappearance and the friendly and cooperative park operative takes her to the center’s own in-house morgue. Deep in the basement (ho hum), down the creepy stairs (double ho hum), lay the mangled remains of the latest visitors to the Yellowstone Park of Hades.

When the phone rings and the attendant has to leave Sara alone with the decomposing bodies, one moves (triple ho hum). In the end, it is the great work by Japanese actors playing the locals that saves the day. They fit perfectly into the genial and confrontation-avoiding stereotype while walking with at least one foot in the rotting underworld of the dead and damned. The only thing missing is a shot of a Toyota assembly line leading to the gates of Hell.

In the background, the suspicious death of the girls’ parents hovers over the story. Killed in a car accident says Jess, but the flashbacks of the shotgun tell a different story. Were either of the girls involved in their parents’ demise? There is no solid evidence, but there should have been. The grandmother certainly seemed settled enough as the blasts echoed through the cottage. As serene as could be, granny herself might have been part of that Toyota assembly line.

“The Forest” is a good, solid, middle of the road scary movie. No Oscar noms for this one, but look out for these folks in the future. More camping stories to come. 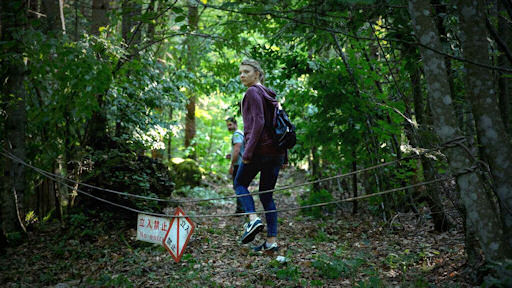