Director Anne Fontaine’s narrative fiction bio-pic packs a powerful punch. It is a story of the most unlikely people coming together in the worst of times, and good coming of it.

Lou de Laâge plays French medical student Mathilde Beaulieu, serving in a French Red Cross medical outpost in Poland. Samuel (Vincent Macaigne) is her supervisor and mentor, a Jew who has lost his entire family in the Nazi extermination camps. Neither Mathilde nor Samuel have strong feelings in favor of the local Polish population. When a novice Benedictine nun walks through the freezing cold, snow-covered forest to beg for help at the medical center, Mathilde turns her away. Later, she relents when she sees the novice kneeling on the frozen ground, praying that the life of her sister might be saved.

In the convent Mathilde meets prioress Maria (Agata Buzek) who tells her, and the audience, what is at stake. Not only is the health of the pregnant nuns a threat, but if the local community hears of the pregnancies the entire convent will be closed. There is only one answer, extreme secrecy. As it turns out, that secrecy is both a curse and a blessing.

The pattern of rejection, acceptance, recovery and growth is repeated throughout the movie. The repetitions are interlocked into the powerfully depicted, extremely isolated, lives of the sisters in the convent and the lives of Mathilde and Samuel. In the end, their coming together starts a healing process that none of them had thought possible.

The film tells the story of Madeleine Pauliac, with changes here and there. For example, according to her nephew Philippe Maynial, Pauliac was not a medical student, but a full-fledged doctor. The student label allows her to be the subservient rebel who shows the way to the brilliant and dedicated Samuel. The communist- atheist characterization wedges a more extreme difference between her and the fanatically orthodox Catholic nuns.

The actions of Samuel might have been undertaken by Abbot Belliard who was imprisoned by the Germans and barely escaped with his life. He dedicated himself to the recovery of the region after the armistice.

In the real-life story of Dr. Pauliac, when the Russians arrested her entire Red Cross contingent she makes up a fast story about a non-existent relative war hero. In this screenplay Mathilde keeps the threatening Russian troops that the coinvent is infected with typhoid to get them out and forestall a repetition of the Nazis’ ravishment.

In the strongest performance of the film, Agata Kulesza plays the Mother Superior. Only she and the eldest sisters can comprehend the scope of the trauma and spiritual damage caused by the rape of the nuns by the Nazi troops. As the war ends, the Russians invade Poland with the same cold blooded brutality as the Nazis. The century old isolation and single minded devotion of the convent is coming to an end on several levels and the Mother Superior takes the load onto herself. The assault has left her not only a mental victim but a physical victim in a way that taxes her ability to make even simple decisions, let alone the history making changes that must be enacted. In the end, although she pays the extreme price, the convent survives, as do the multitudes of other victims of the war.

This great movie is out in Blu-ray, which makes the cinematography sparkle. See it in that format if you can. 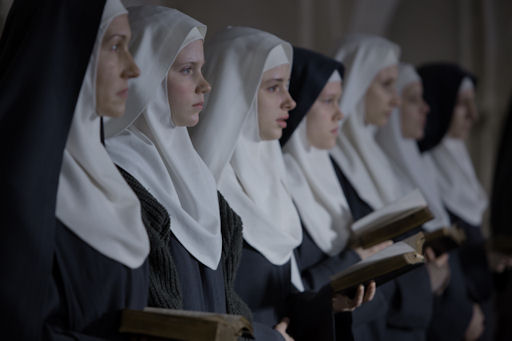