Set in the scenic Somerset Levels across the misty Bristol Channel of the Atlantic opposite Wales, this poignant film is the master teacher on reunification and redemption. Beginning with a happy revelry in mid-October, the guys get hot and riled up as they dance around a fire. Charlie is celebrating his ownership of the family farm, but soon has an unfortunate confrontation. 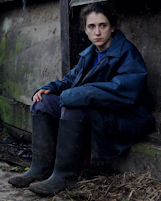 The smart Clover Catto (brilliantly played by Ellie Kendrick) hears her younger brother, Charlie, has died. She rushes home to the old farm and learns that the police have reckoned the death a suicide while her father is adamant it was a mistake, an accident. Clover, given a cow name that sets the stage for her history of diminution, finds the entire farm in disarray and her dead brother’s dog unfed and shut in a shed. A pack of dead badgers is found on the property and the cows have contracted TB. The farm, like the last vestiges of her father-daughter relationship, looks doomed.

Clover’s mother died when she was six and it seems her father’s stiff English upper lip is in permanent position. Clover is intelligent, responsible and progressive. She outdoes everyone in the family, but when she was around 17 and headstrong, her father told her to move out. With initiative she left to enrich her potential studying to be a veterinarian.

How the director/writer, Hope Dickinson Leach, chose the title, “The Levelling,” may have a few different interpretations. For certain, there are different things on the farm that are in vast opposition to each other. First of all, there is Clover’s way and her father’s way. Clover has compassion and empathy for all the farm animals. Her ruthless father is disengaged. Clover asks questions and is curious. Her father gets frustrated with queries and only gets irritated as his daughter refutes his constant “Stupid” epitaph for her.

Another way to look at the levelling is to look at the land. The filmmaker, who grew up in Hong Kong, purposefully set the story in the Somerset Levels. This part of southwestern England consists of various levels of marine clay and inland peat moors. Using this metaphor, the film’s plot parallels the years of history of both the family and the land that threaten to poison the present time. The flat Levels are subject to more and more flooding each year. As salt water sweeps in from Atlantic storms, the Levels become poisoned by salt so farming is ruined for the season. After a series of such storms, ending with the traumatic flooding of 2013-14, Clover returns for the funeral and is blamed for leaving them to the devastation her father and brother have experienced at the hand of mercurial nature.

The analogy between being responsible for your family and property is juxtaposed to taking care of your country and its land.

Leach refers to her choice of the Somerset Levels, saying, “finding a location for this story that would give the story a lot more depth was everything for me. The 2013-2014 floods in Somerset felt like a fantastic metaphor for what’s going on in this family relationship. Rivers were not being dredged, the floods happened because the rivers were silted up. And here is a family that has stopped talking and the channels of communication stopped…It felt rich, cinematic context for this story.”

“The Levelling” is a well-acted and directed film. Promoted by Monterey Media Inc., it opens in Los Angeles on March 31, 2017. It premiered at the Toronto International Film Festival in September followed by a screening at the prestigious British Film Industry’s London Film Festival where Cate Blanchet awarded Leach the IWC Filmmaker Bursary Award, worth £50k ($461,856.75 USD). 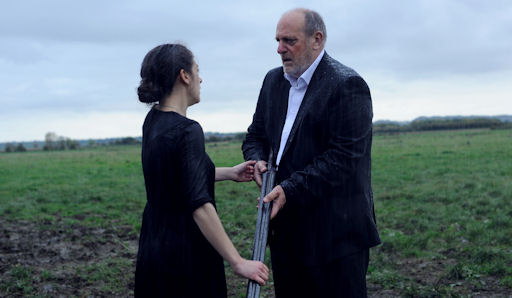