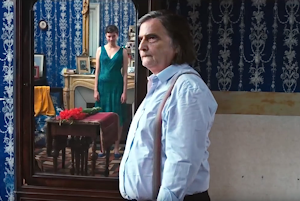 The 23rd Rendez-Vous with French Cinema, co-presented by Film Society of Lincoln Center and Unifrance, brings you the 60th year of Jean-Pierre Leaud’s acting life. As the actor Jean, he finds it hard to play his own death. Understandably so, since, as one of the crew reminds us, “nobody can.” That said, Leaud comes close. As always, he stubbornly improvises his lines and, presumably, many of those of the ten children who play his confederates.

There are two films within the film. The first is the movie where Jean dies, being made by professionals who “take the work seriously.” The second is the ghost story being made by the children who make their movie for the love of making movies. Leaud is clearly on the side of the children as he creates the screenplay on the fly, a series of semi-directed narrative conversations between Jean, his pre-teen movie crew and his lost love Juliette (Pauline Etienne).

It is not clear that Jean has not already passed on to the “shadow of life,” along with his one true love. Clearly, she is a ghost, the spirit he left behind to pursue worldly fame and fortune. He wants the children’s movie, in his view the true story, to end in the lake where she mysteriously lost her life. Although the commonly heard story is she drowned accidentally, Jean is much more implicated.

Now, after 60 years of pursuing his dream in cinema, and doing it his way 100 percent no matter what people said, he knows he must live with what he has wrought. He made his choice between the serious people and the children, in fact, living both lives at the same time. In doing this he did the impossible, living life and in the “shadow of life” at the same time. He shares his thoughts about this in making the film with the kids.

Cannes winning director Nobuhiro Suwa (“M/Other,” 1999) takes on the monumental task of looking back on Jean’s life (and perhaps Leaud’s) and using that to comment on the nature of life itself. Now that life has come full circle for Jean he realizes that the one thing he needed the most he never got. Even worse, he gave it up for the wrong things. He lost his ability to think straight when he was young and had no excuse. Now that he is in his seventh decade, he is also not thinking straight but this time for the right reasons.

Life, death, adulthood, childhood, rational thought and the world of the imagination. Those are the real countervailing forces making up life. The movie Jean is making with the children is not about telling a story, it is about telling the children how to live the story. Just as Leaud prefers to live his lines rather than memorizing a script, he is telling the children, and the viewer, to pay attention not to what you are supposed to want, but what makes your life complete.