Review: The Measure of a Man

Vincent Lindon uncorks a spectacular, if understated, performance in “The Measure of a Man,” writer/director Stéphane Brizé’s essay on the present day working class. The screenplay, co-written by Olivier Gorce, features Lindon as Thierry Taugourdeau, an unemployed/underemployed man trying to support a family. 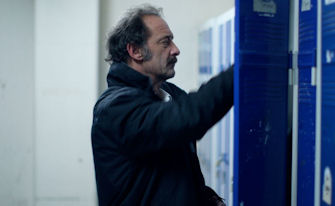 Lindon and his wife and child are remarkable in their lack of moral flaws. Although his son is disabled, he is doing well in school. There are no drugs, gambling, addictions or betrayals. Even so, Taugourdeau and his family are slowing being driven into poverty and homelessness.

The power of this movie is in its ability to paint a horrendous picture of a normal scenario. Working class jobs have gone overseas and blue collar workers are unemployed and at the mercy of the so-called “free market” economy. Without ever mentioning the parts of the free market that benefit from the plight of the working class, Brize’ sends an unmistakable message. This cannot go on forever.

The problem is that the formerly employed who have given up their jobs to cheaper labor in foreign countries are not stupid. Even if hungry, poor and homeless, they will still make rational decisions. This is a problem for the wealthier classes, because even the best case scenario is bad for them. The workers will vote with their feet and refuse to work at all.

The screenplay has two parts. The first is the cementing of Lindon into the institutionally unemployed. His former employer did not train him on the next generation of computerized machines so when he was laid off it was that much harder to find work. His skills were outdated even while the corporation was outsourcing his work overseas. By the time he was out of work, he was already well behind the curve. What follows is government posturing and incompetence that ensures he will stay unemployed.

In the second part of the film Linden gets a security job in a big box store. The big box store itself is struggling to survive, probably, as a result of online sales outlets. As a result, its human resources practices are cutthroat. As a security guard Lindon is tasked with spotting shoplifters. However, his more important job is to spot clerks violating rules, so they can be fired without repercussion.

Lindon won the coveted Best Actor award at Cannes 2015 and Brizé a Special Mention for their work in this film. Brize’ was nominated Palme d’Or. Lindon also won this year’s César for Best Actor. Although Lindon hardly says a word, his acting and lean unvarnished screenplay pack a powerful punch. 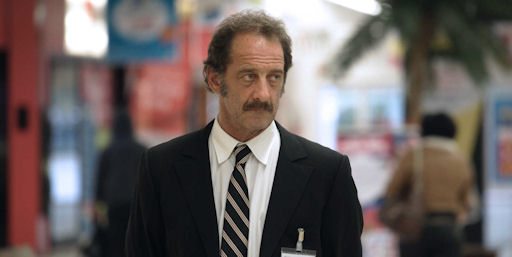