Jerzy Kosinski’s novel was debunked almost the day it reached the bookstores in 1965. The author’s claim that the story of a young Jewish or Gypsy boy was his own was left by the wayside. Despite that, the story reaped acclaim for its visceral depiction of the horrors of war and the vivid picture of people living on the edge. The war setting might be an excuse to tell the story of marginalized people living today, the obvious brutality a cover or an excuse for what cannot be excused. The terrible present lightly veiled in an historical context.

Director Václav Marhoul’s screen adaption is fine, leaving out what has to be left out to fit in the screen time. The cinematography is lush and natural. There is beauty everywhere, contrasting with the nonstop nastiness of the people. The rushing river and restless wind give notice that war is coming. There is change and it will not be good.

The outright superstition in the beginning, the orphan boy is branded a witch, blends into the very real nightmare of WWII as the child becomes an outcast. Fear builds upon fear as the truth dons. He is hunted, different, like the painted bird. A hermit, Lekh (a great performance by Lech Dyblik), catches birds to sell as pets in the village market. He delights in showing the boy how a painted bird is killed by members of its flock. Even though it is the same bird as before, appearances are everything. It is one of his last dying breaths.

The bucolic beauty of the village gives way to predictable Nazi atrocities, somehow fading in comparison to the senseless, coincidental killing that is everyday war. Perhaps the energetic attacks on the movie stem from the depiction of cruelty that might be current rather than only a memory of times past. The church gets its turn as the priest (Harvey Keitel) turns a blind eye to the sexual abuse of the boy.

Barry Pepper, in one of the most profound acting roles of the movie, reprises his role from “Saving Private Ryan” as Mitka the lethal sniper. He not only lets the boy go at the risk of his own life, he gives him the key to survival. Now armed, the boy continues the cycle of violence to simply eat. His survival comes at a horrendous cost, he has changed forever, branded by cruelty, he has become cruel himself. His denial of his humanity may have given him his life and cost him his soul at the same time.

A viable anti-war film, the messages reverberate with today’s current events. The Nazis are an easy target, the church and long held prejudices less comfortable in their denunciation. The story is all the more powerful for long since being outed as fiction. Even in the wake of allegations of outright plagiarism the story dares one to turn away. There is truth here, presented in such an unrelenting and vivid manner as to demand an understanding. 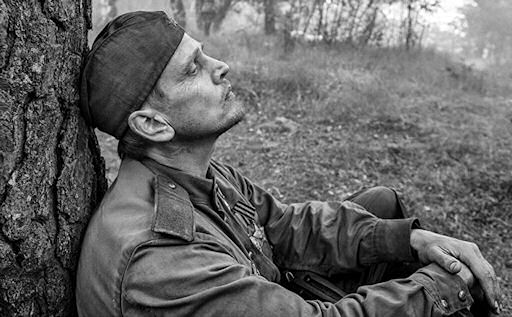