Even the uninitiated and marginally informed will recognize Shimon Dotan’s documentary as having a decided agenda, but to call it a propaganda film is going too far. It is composed of archival footage of the history of the Sinai Peninsula, the Gaza Strip, the Golan Heights, and the West Bank starting with the 1967 Six-Day War. Winning that conflict Israel tripled its territory while its new borders greatly improved its security. This archival footage is complemented by extensive interviews with a ride range of settlers in the area, most espousing their right, duty and destiny to live in the area.

These territories have been “occupied” by Israel. Although, according to provisions of the Geneva Accords, civilians are forbidden to “occupy” land taken through military victory. Since that time, hundreds of thousands of settlers have moved in and, apparently, have assumed the land is their own.

That is the last this review will say regarding the politics of the situation. Things get far too complex far too quickly to be summed up. The film does a very good job summarizing the history of the region. This is a history lesson that cannot be seen too many times by the rest of the world. It is as important as it is murky and hotly controversial. The archival footage is great, featuring the founding fathers of Israel, the swaggering Moshe Dayan and the rough and ready early guerilla military.

Interviews with the settlers get most of the screen time. The new occupants of the land run the gamut of families looking for new opportunities, to “hippies” wanting to live off the land, to religious zealots and self-proclaimed messianic charismatics. There are many echoes of similar situations in others countries. Regarding the USA, the hippies sound very much like our own hippies and their “back to the land” movement of the 1960’s. Most of them found out that farming was too much work and life was much more enjoyable sitting at a desk in the city.

The situation in the occupied territories is much more serious. The people there, young hippies aside, are more committed and there is no easy alternative for most of them. At the least, leaving means sacrificing years of work. Although it may be in the country’s best interest to compensate tens of thousands (hundreds of thousands?) of settlers to leave and clear the way for a “land for peace” deal, that would be violently controversial, to say the least. Even worse, there could be armed conflict.

The mark of a great documentary is access and just plain hard work. Director Shimon Dotan has shown both, in spades, in this powerful film. Sadly, it is a limited screen shot of an extremely complex and painful tapestry. Even so, it is far better than nothing. It is important for the entire world to work to understand the cultures and emotions of the region because, if a war breaks out, it will be a war that touches us all. 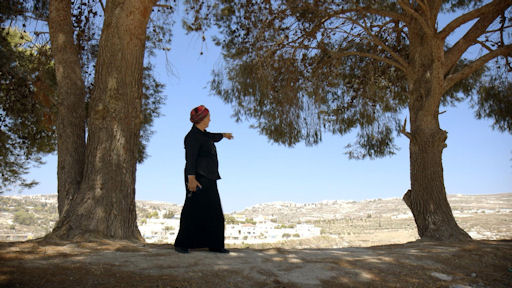