Writer/director Kirill Serebrennikov dives headfirst into the adolescent mind in an entreaty for understanding, and, well, common sense. Student Veniamin Yuzhin (Pyotr Skvortsov) is having a bad day and it is up to his science teacher, Elena (Viktoriya Isakova), to stop it. Or, as she says, to stop the minor insanity that is adolescence from becoming a major insanity. Nice try, but no cigar. She fails, and boy are we glad she does. 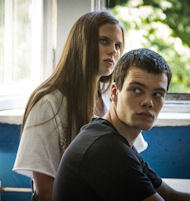 The first half of the movie is Veniamin spouting off an impressive memorized array of biblical scriptures. When this results in a conflict with modern science, evolution being the main culprit, things seem to be going well. He has an opinion and is welcome to it. He even sticks up for a disabled classmate when bullies attack the boy. It is when the scene changes to the school’s head management drinking themselves into comas that we know something may be seriously wrong. Veniamin is getting under everyone’s skins. Especially Elena’s.

By the end of the film the situation has changed from a screaming match to scenes inside a B-movie insane asylum. Unfortunately, there is so much irrational nonsense that there is no longer any right or wrong. The viewer is lost as to whom to root for.

Perhaps this is the point. It was never the intent of playwright Marius von Mayenburg (who penned the original story) to give the audience the break of having a clear-cut champion among the players. The intent was to show up the “system” for the machine that it sometimes is. Veniamin is a composite of all the needy people in the world; not just teens, but people of all walks of life who need understanding. In many cases, needing understanding is labelled as simply not fitting in. Not fitting in is a convenient excuse for ejection from the safety net. The mass of society moves on untouched, but this is not about them.

Veniamin’s fellow students move as one cohesive mass of disengagement. Elena’s partner abandons her, as do her colleagues. In the end the student and the teacher are equally, totally, unmoored from their previously concrete principles. The only things that remains are the curiously uniformly gray skies, the empty gray streets and the hideous beach of grotesque cement tetrapods, the dumped pile of castings as mute as the population surrounding the two protagonists.

The only humanity on the beach are the students skinny-dipping, somehow picking their way between the tank-trap like formations. In the classroom the ordered desks gradually give way to disorder until in the closing scene they are stacked up in a corner leaving only the bare, worn floor. In the midst of that interstellar void of learning, the teacher nails her shoes to the floor in defiance. The classroom may be gone, but she remains.

Revenge fantasies mix with useless escapism as everybody looks for a way out. Of course, there is no way out, and, certainly, not through the halls of learning. 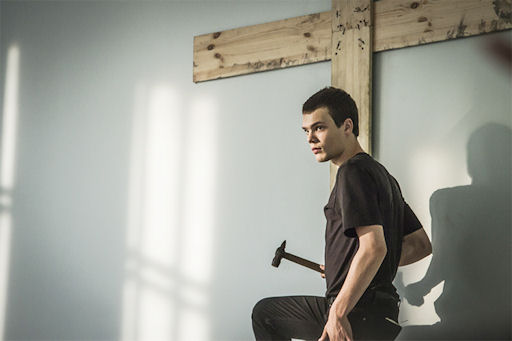