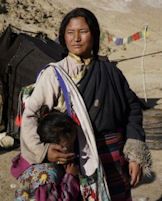 This is a deeply moving story, inspired by a true account, shot alternately in the desolate high Ladakh region of the Himalayan Mountains and in the Tibetan exile warren of Delhi. Award-wining Tibetan exile filmmakers Ritu Sarin and Tenzing Sonam, associated with Richard Gere in previous work, tap questions at the core of the human soul.

The film begins with beautiful Dolkar, a sweet 8-year-old who is on a trek across the dangerous Chinese (Tibetan)-Nepali border. Not desiring this journey, she tearfully clings to her mother. Her father insists she must go with him across the border to India where she will be met by relatives. We infer that her parents want her to grow up where more opportunities and a certain freedom awaits. But is this really in Dolkar’s best interest?

Freedom and Exile
In 2006 on the high border between China (Tibet) and Nepal a group of Tibetans headed for Nepal was targeted by Chinese border guards. A 17-year old nun was shot to death. A Romanian mountaineer coincidentally captured the crisis on video.

Sarin and Sonam, a married filmmaker team, saw this video and wondered who these Tibetans were and what their journey entailed. Why, after almost 50 years, were groups of Tibetans still risking their lives to leave their homeland? Why were so many of the recent travelers children?

Plus, if China wants to rule Tibet so badly, why would they care if Tibetans fled to India or Nepal?

Contrapuntal Plots
Two contrapuntal stories are told in “The Sweet Requiem” to address these questions. One is Dolkar’s risky journey in freezing conditions through areas monitored by Chinese sharp-shooters. This traumatic voyage is a memory that bit by bit weaves into the story of Dolkar as a 26-year-old. One is keenly breathtaking in its stark

Haunting Sadness
The artful suspense in each part of Dolkar’s life is linked to the sacrifices everyone makes so she can have a good life.

When a weathered man, Gompo, arrives, the haunting is magnified by nighttime cinematography. Dolkar immediately recognizes Gompo as the guide who helped bring her part-way to India 14 years ago.

Gompo is played with extraordinary depth by Jampa Kalsang Tamang, who was born in Nepal to Tibetan refugee parents. He is currently one of the best Tibetan actors in exile. Caught in the winds of self-preservation, family need, and a renegade personality, Tamang manifests Gompo’s guilt and despair.

Dolkar is magnificently played with quiet grief and understated strength by Tenzin Dolker, who was also born from Tibetan refugee parents.

Suspense
Dolkar silently follows Gompo. She sees two Communists come for him, offering to spare his wife, who has been imprisoned and charged with his crimes, in exchange for spying on the exiles.
Is Gompo a good guy or a villain? When Dolkar slips out of the shadows and puts her hand on Gompo’s shoulder, what is her plan?

Requiem
A requiem, a remembrance for the dead, can offer a catharsis for the present. It can also be a mourning or remembrance for events past. The arduous, calamitous trek across the Himalaya that is interspersed throughout the film, is a remembrance and re-traumatizing of a loss so great that 26-year-old Dolkar cannot speak of it.

Love and Freedom
The one continual thread that links all parts of “The Sweet Requiem” is love in its many manifestations. Love of parents, friends, dancing, religion and country. Though Dolkar wears Free Tibet shirts and worships Buddhism at altars with pictures of HH Dalai Lama can she ever really love or ever really be free?

“The Sweet Requiem” – an award-winning film about love, forgiveness and freedom – has its US theatrical release July 12 at the IFC Center in NYC, with other cities following.