Review: The Time Being 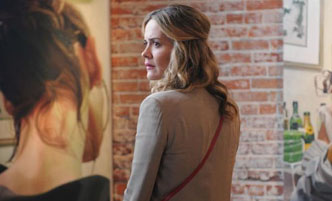 In one of the most atmospheric films to come out of California in some time, debut director Nenad Cicin-Sain helms a screenplay by himself and Richard N. Gladstein in the film “The Time Being.” A film ostensibly about painters and painting, the story is more about obsession, self-knowledge and difference between artistic expression and ego. An exciting work by a first time director, this films portends greatness for Cicin-Sain.

Wes Bentley plays struggling artist Daniel who is fighting a losing battle balancing his obsession with artistic expression with his relationship with his wife Olivia (Ahna O’Reilly) and his five-year-old son Marco (Aiden Lovekamp). There have been many films made about artists in general and painters, in particular. The danger is that the director and screenwriter allow the art to run away with the film. This film starts out threatening to do exactly that. The opening scenes of the movie are heavily concentrated on Daniel’s act of painting, the paintings themselves and his new opening at the uber-trendy gallery.

Daniel’s painting are very good, but they are limited in their dynamics. Apparently in black, white and grey, the paintings reflect still lives of fruit in spoiled and corrupted abstractions. Moody enough, and made even more so by the excellent somber and threatening string arrangements of the sound track. Things are not going well in this film and the director succeeds in making that remarkably clear even while we indulge ourselves in the cozy, trendy, rich life of the artistically gifted and their circle of supporters.

It seems a little odd that the artist is able to appear relatively comfortable, with his wife and son, while not selling anything. We are soon informed by his wife that they are not that comfortable and, in fact, Daniels painting is driving them into the poorhouse. Even worse, while they are being driven to the poorhouse, Daniel is driving Olivia to the nuthouse by completely ignoring her.

While major parts of his life are calving off into the ocean like a melting glacier, the artist actually sells something to the rich recluse Warner Dex (Frank Langella). Dex demands delivery in person and upon delivery he gives Daniel several assignments to make video recordings of places, things and people. Dex dying, he tells Daniel, and wants to experience a few last visions of the world before he leaves it. As Daniel carries out his assignments, his life further deteriorates but there is something opening up as well. Even though Dex appears to rate very high on the hateful, bitter old man scale, he is causing Daniel to think about his life. There is something very odd about the video assignments, very odd that a man about to die would want images of sunsets, art show exhibits and children playing in a park. 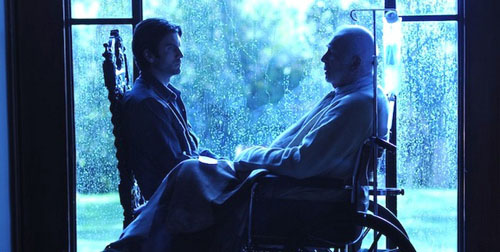 As it turns out, Daniel is going to have the chance of a lifetime to see into his own future, and the prognosis is not good. Dex is not only buying the artist’s work and paying him for photography, he is opening a door into his future, or into his possible future. With his last dying breaths he is mentoring the younger artist in not only the ways of oil painting, but in the ways that oil painting can ruin a life.

Filmed completely in California, the movie is rich in the marvelously varied textures of the Los Angeles area. Dex lives in the arid desert lands outside of the city, in a sumptuous villa that is as luxurious and richly appointed as it is hideously alone in the desolate badlands. The warmth of the afternoon sun and the shimmering blue of the ocean are contrasted to the blank palette of the desert, upon which the desert of Dex’s emotions will breathe their last, parched breath.

There is a mysterious pile of apparently discarded furniture and broken wood in the back yard, as if the house is spitting out dead pieces of itself as Dex coughs up dying pieces of his broken life. Daniel is looking into the future and the future is not bright. But what does this mysterious series of meetings have to do with him? Why does Warner want these obviously unrelated photographs? Why did the dying man choose Daniel for this mission? Why are there no sexy bodies shown at Venice Beach?

This film survives the twin threats of letting the art and the art lifestyle run away with the film and letting L.A. run away with the film. It is filmed there but it keeps the Southern California mystique firmly in the back ground. In the foreground are excellent performances by Langella, Bently, O’Reilly and mysterious museum tour guide Sarah (Sarah Paulson) and that wonderful, haunting, percussive string sound track (original music by Jan A.P. Kaczmarek).

“The Time Being” is a great story about images and reality, self-delusion and the things in life that really count. 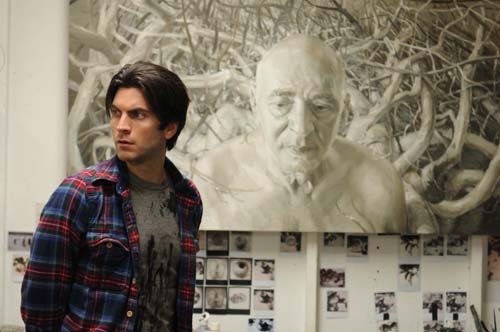