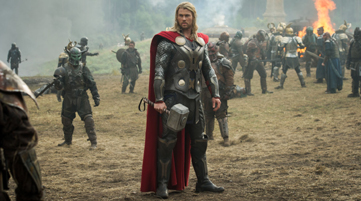 A little background first: I am an avid Marvel comic book reader, so I know what goes on in the Marvel Universe and my least favorite character is Thor. I have always found Thor to be a boring character and I only enjoy him in his storylines with Amora. As for the Marvel movies, Phase 1 started with a bang, but so far, Phase 2 — which began with “Iron Man 3” — was a superhero disaster. Now we have “Thor: The Dark World,” which takes place after Avengers. We find Thor in a battle to save the nine realms from Malekith The Accursed, ruler of the Dark Elves of Svartalfheim.

“Thor: The Dark World” lines up for the 2-point conversion to break the trend of Marvel movies, but the attempt is blocked by recaps and repetitiveness. In case you did not get the message about the nine realms and how they converge, don’t worry because Thor and Odin will remind you of that over and over.

The first-half of “Thor 2” is an absolute nightmare to watch because as if the storytelling isn’t bad enough, it jumps genres while not really giving much of anything you do not already know regarding Asgard. The first half of Thor reminds me of a chicken with its head cut off since it jumps around so much. One thing I hate about this movie is that it has way too many “jokes.” In fact, this movie could be considered a comedy (both intentional and unintentional).

A problem I had with “Iron Man 3” was how they handled the main antagonist – it was simply a wasted opportunity – and, sadly, Thor follows the same trend. Christopher Eccleston delivers a strong performance as Malekith, but his character gets stiffed in the editing as the extra minutes to push this over two hours could have been used to flesh out his character. Have you ever gone to Subway and ordered a sandwich and noticed there was hardly any meat? Well, Malekith gets the Subway treatment here as we never get the whole story behind him and the story shifts too much back to Loki.

Loki (once again played by Tom Hiddleston) is the strength of the film – in fact, it reaches the point where every scene he is not in seems dull and boring. Thor and Loki together have some of the best scenes and it is very clear that Chris Hemsworth and Hiddleston have great chemistry. On the flip-side, Natalie Portman and Hemsworth are awkward together this time around. Portman does not seem thrilled to be in this film and it is very obvious, which may explain the bad chemistry between herself and Hemsworth.

Eventually, “Thor 2” does pick things up towards the middle, but it’s too little, too late. The best things about this film are the stunning visuals of Asgard and the tremendous fight scenes. “Thor: The Dark World” may be a disaster, but it is still better than “Man of Steel” and more enjoyable than “Iron Man 3.”

Ultimately, “Thor: The Dark World” can still expect to line up huge numbers at the box office, but for me, once was enough. And, as usual for a Marvel movie, make sure to stay for the credits. There are two clips this time around.