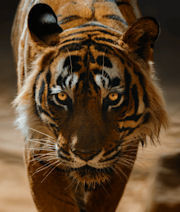 This is the true story of a murder trial in India. There is indisputable identity, grief on all sides and visceral gore. The perpetrator is Ustad, a male referred to as T24. He has a beautiful partner and two gorgeous children. His fourth victim was Rampal, a forest guard in a protected tiger preserve in India, whom he ambushed, killed and began to eat.

Coincidentally, award-winning filmmaker Warren Pereira was filming a documentary on Ustad, a magnificent Bengal tiger, not too distant from the time of the attack. He has gorgeous footage of Ustad looking directly at him, relaxing in a stream, playing with his son, and cavorting with his partner. All Ustad would have to do was jump in the open-air vehicle where Pereira stood with his film equipment. It would have been an easy maul. But maybe not as easy or tempting as Rampal who walked off the tourist road into the jungle, Ustad’s domain. All the guard had was a long bamboo stick.

There are so many things frustrating and wrong about this whole scenario. The viewer is in the position of the judge and jury. We hear from legal experts, a representative from the National Tiger Conservation Authority (NTCA), witnesses, family members, animal rights sympathizers and Ustad’s attorney. What will the verdict be and where does our own value-judgement fall?

Pereira has won a Cannes Gold Lion award in recognition of his creativity. He founded The Tiger Fund LLC and has produced films on tigers for the Indian government.

Tigers in the wild, like jaguars in South America (“Tigre Gente”), are part of an ecological chain that helps assure the health and biodiversity of the great forests and jungles of the world. But the management of these protective parks is a science and strict regulations and environmental safeguards need to be enforced for both man and beast.

In India, forest guards are not equipped with weapons aside from a stick. They walk. And tourism is promoted so that the wild animals become accustomed to people taking their picture and even walking on the same paths. In Ustad’s case, each year there is a pilgrimage to a shrine located in his designated territory. People pad on foot through his terrain. There is a brief glimpse of actors Michael Douglas and Catherine Zeta-Jones, who are exhilarated by the sight of the great Bengal tiger from their open-air transport. It is interesting to note that Michael Douglas starred in a 1996 film, “The Ghost and the Darkness,” in which he played a white hunter tracking down two man-eating lions.

Protection, conservation, ecology, tourism, pilgrimage, and wandering forest guards combine to create a trial only a wise philosopher can adjudicate. Pereira, from his perch with a camera, gives us a spectacular view of the wild and the civilized, as well as the brutal and the ignorant. This is a film to see. 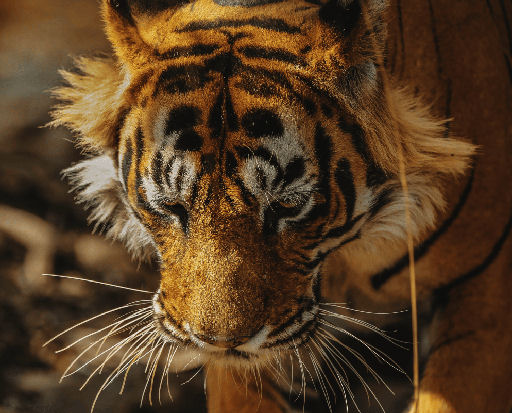