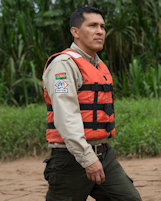 When does a documentary become a thriller? It’s when the camera is allowed to follow a real-life, unscripted man-hunt with passion, risk, and danger. Elizabeth Unger, adventurist and National Geographic Explorer, convinced Chief Protection Officer Marcos Uzquiano to let her follow his Bolivian team as they hunted poachers who tracked jaguars in the thickly verdant jungles of the deep, dark Madidi National Park. Meeting up with either stealthy predator could mean their immediate demise.

“Tigre Gente” is a cinéma vérité adventure-mystery documentary that took more than six years to make. It opens with a majestic panorama of the Madidi Forest. There is dark and there is light – in reality and in spirit.

Uzquiano has had an affinity with the jungle and its creatures, especially the jaguar, since he was a small boy. Lately he has been having night visions. “One night I really saw the Madidi River. It ate the jungle and it ate the mountains. … The river is telling us it wants to destroy the jungle and is warning of a potential problem in the National Park.”

Uzquiano interprets his dream. There is a threat to the careful balance of the Madidi ecosystem. The apex of the food chain is the jaguar, with whom Uzquiano feels a spiritual bond. He knows that the Forest will die without a stable ecosystem and proportionate prey population that only the jaguar can manage.

Ungar is the Indiana Jones storyteller of environmental cinema. At its core, her work, like the Indiana Jones series, is about good and evil at work in the world, anchored by the belief that good will prevail and evil will be judged. She reveals Uzquiano masquerading as an undercover agent, she marches through the jungles with the Bolivians as they stop, look and listen for signs of their quarry, and she is on the river banks in the velvet dark of night as they come upon the poacher’s lean-to and still-burning fire.

At the same time, interspersed throughout the story, she follows beautiful Laurel Chor, a journalist and fellow National Geographic Explorer, who searches for jaguar fang dealers in the backstreet markets of Hong and Guangzhou. The reason the poachers are hunting the jaguars in Madidi is that they they can sell the fangs for traditional Chinese medicine and amulets. For a Bolivian local, one jag fang could pay $150. For a trader in China it brings $5,000.

“Tigre Gente,” meaning tiger people, was presented by the EarthX Film Festival 2022, May 12-15. This year’s theme, “A Celebration of the Outdoors,” focuses on “the environment, conservation, climate change, and science while honoring the heroes working to protect our planet.” Unger’s first feature film, “Tigre Gente,” smolders with beauty and complexity as well as suspense and danger. 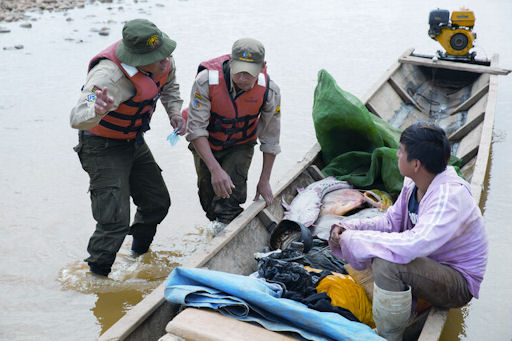 Tags: Elizabeth Unger
Posted 17 May 2022 by Bev Questad in Reviews