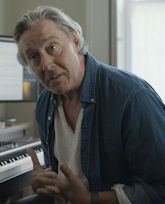 Voiceover by narrator Bill Nighy (“Page Eight”): “In 1973, a then-unknown 19-year-old musician produced an album that would change the face of music … forever. That musician was Mike Oldfield; the album, “Tubular Bells.”

So begins this documentary on the 2021 development and presentation of a re-envisioned, cinematic version of the album, which included visuals, vocals and an acrobatic modern dance team from Australia.

A little background: Mike Oldfield was an unknown British musician in 1971 when he joined a band that was preparing demo tapes at a new recording studio known as The Manor. The Manor was run by entrepreneur Richard Branson, who was in the process of creating Virgin Records. Oldfield became friends with one of Branson’s producers, Tom Newman, and asked him to listen to a demo tape Oldfield had produced in his London apartment. The rest is history.

“Tubular Bells,” which was developed from that demo, was the first album produced by Virgin. It went on to sell more than 15 million copies, and became the sound track for “The Exorcist.”

Michael Stevens, a producer for the London production company “Fiery Angel,” set about to bring together the elements for a re-envisioning of Oldfield’s groundbreaking work. Through interviews, video captured at various points in the development, synthesis, and presentation of this work, and the invisible narrator, we follow Stevens and the other principal participants through what was at times a contentious, nerve wracking, and near disastrous series of steps that led to the opening night at the Royal Festival Hall in London.

Robin Smith, the musical director, explains what his approach to this project was. He talks at length about how he will amplify the original work while staying true to it’s inspiration. Yaron Lifschitz, artistic director for Circa Contemporary Circus, explains his point of view as to how the production should proceed. The two are not always in agreement.

We also get to meet the musicians who, under Smith’s direction, will perform this very complex piece. One standout is Jay Stapley, a bit of a comic in Hawaiian shirts who plays lead guitar.

A very important interview, threaded through the production, is that of Tom Newman, the producer of the original “Tubular Bells” and a number of other collaborations with Oldfield up into the 1990s. Tom is an old man now, but he reminisces about his days with Branson, Virgin Records, and Mike Oldfield. He laughs a lot, but there is a sense of sadness behind it – perhaps a bitterness that things have not turned out as well for him (on a government pension) as it has for some others.

The documentary takes us through the paces of development as the time until opening night grows shorter and shorter. Then, it is the day itself. London is undergoing a monumental rainstorm and portions of the roof of the hall collapse, leading to flooding in various areas and the very real possibility of the show not going on. But it does, and is a rousing success. Afterward, Robin Smith is musing. He wonders whether the audience even knew the orchestra was on stage – he is sure they knew the acrobats were. The performance was an audience pleaser, but did it accomplish his goals musically?

Perhaps the cinematic qualities ended up being more than he’d bargained for.

I’ll save the last words for Mike Oldfield himself:
“It’s amazing to think that it’s 50 years since I started writing Tubular Bells, and I am touched that my music has reached so many people, all over the world, during that time. I am sure that the 50th Anniversary Live Concert Experience of Tubular Bells will be spectacular, theatrical, fantastical and thrilling, marking 50 years from when I started writing the music.”

Note: Oldfield did not participate directly in the making of this documentary.