Shirley Morrison, now 92 years old, has a history of speaking her mind, asking the important questions and being jailed over 12 times. Hinda Kipnis, age 85 (b. 1929), is known for her protest parodies and contrarian New York-bred point of view.

A glorious Norwegian, Håvard Bustnes, created this surprising doc. He had intended to do a film on the world-wide economic recession that began in Dec. 2007. While researching the subject he ran across Raging Grannies, an international consortium of activist women. Then he met Shirley and Hinda in Seattle and his film was born.

Screened at the 2014 Seattle International Film Festival, this enjoyable doc opens with Shirley phoning the University of Washington with a request to attend a lecture on economic growth.

Travel anywhere is a challenge for both Shirley and Hinda as they both drive little carts to get around because of medical disabilities. So arriving at the UW classroom took time and planning. A surly professor huffs into the classroom and is inexplicably inhospitable and rude. Then Shirley asks a seemingly innocent question, “Why do we need economic growth?”

He should have responded, “Well, tell me one reason why we shouldn’t.” Instead, flummoxed, he commands both Hinda and Shirley to leave the classroom. They are a disruption.

Shirley’s questions get this kind of inexplicable anger from “those in the know.” The instructor is not the last to treat her unkindly.

We meet Shirley’s family, we go on a physical therapy appointment with Hinda and we see them support each other in their crippled pain. So by the time we go with them on their challenging trip to New York City, we are their champions. 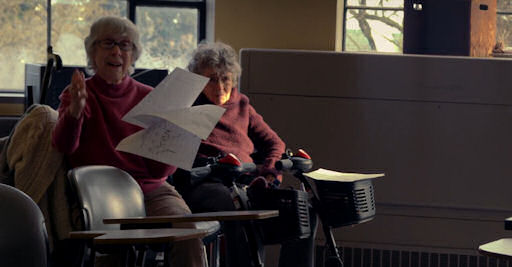 In Manhattan, Joshua Farley, a professor of ecological economics (University of Vermont), meets them, answers their questions and explains his take on economic growth. “We have to shift from quantity of growth to quality of improvement.”

He tells them that many see the “economy as kind of like a bicycle. If you’re not going forward you’ll fall off. The trick is how do we develop a system that does not rely so much on growth?”

Still wanting answers from the believers of growth, Shirley and Hinda buy tickets for the annual Wall Street Dinner. They hope to sit at a table laden with investment gurus. Instead they are seated in the back at a large empty table.

Left with no one to talk to, Shirley ends up approaching the speakers’ podium asking her question about the economy. Security rushes in and the next speaker mocks her saying, “That was my mother.”

Armed with a small camera, Shirley records the security man, who menacingly growls crude profanity, ending with: “I hope you die tonight in NYC on the street.”

When Shirley politely asks him for his name he responds, “My name is your worst enemy. I will find you and track you to Oregon and I will cause you [bleep]ing harm.”

Why do these women provoke these kinds of inexplicable rage? What makes them continue their crusade in their advancing years?

Shirley and Hinda challenge us to think a little deeper and act a little kinder. Bustnes found genius and the lost American voice in Shirley and Hinda. The audience is left hungry for more episodes on their irrepressible activism. We’re ready for Part II. 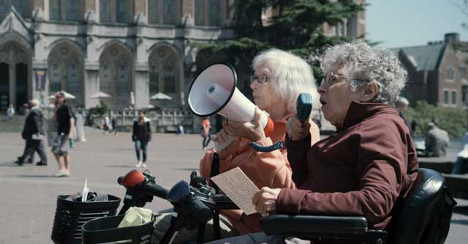