Review: Under the Sun 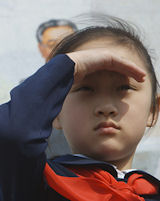 Just when you think you have seen everything, there comes a documentary that is so improbable that it refuses even the label of a doc. As the story goes, writer/director Vitaliy Manskiy was invited by the hyper-secret government of North Korea to make a documentary. The doc was to feature typical scenes in the days of the lives of typical citizens. Their productivity, selflessness and, above all, their loyalty to the leader would be recorded with a sincerity, gravity and accuracy that would leave not a single doubt as to the bliss of the common man.

The film opens with a shot of beautiful, wide streets and massive commemorative sculptures. Unfortunately, there are no cars on the roads and the sculptures are somewhat abandoned, but that is to be expected because all of the people are happily at work.

The funereal soundtrack thuds along in the background, emphasizing the seriousness and glory of the peoples’ lives. Or, perhaps, the music reminds the players of what will happen if they are not perceived by the viewers as the joyous subjects they are.

For the first twenty minutes the movie seems to be just another predictable propaganda flick. It is heading in the direction of 2004’s “State of Mind” about the two North Korean girls preparing for the Mass Games in honor of the leader. Suddenly the camera shifts a little and two very serious men, dressed in black suits and looking like the US Secret Service agents, bob in and out of stage right.

They are coaching the family in the scene. Later on, a severely overdressed general weighted down with enough medals to redirect a compass lectures to a classroom. He describes how the great leader shot down US planes with his rifle while leading troops during the Korean War. During the most exciting part, the camera shifts to a child nodding off in the second row. Again and again, until the child is practically falling out of his seat.

Later on, in a clothing manufacturing sweat shop, the cameraman goes on a tour of the modern facilities and the happy workers. Some beam and some do not. Some seem to conscientiously ignore the camera. The government director steps in and admonishes the workers. “Look happy,” he orders. An award is given for the outstanding worker of the year. The other workers deliver scattered applause. In pops the government official. “No, clap louder,” he insists. After the retake, “You must stand up, smile, clap louder and appear genuinely happy!” The camera fades out, leaving the gleeful workers in its wake.

Again, as the story goes, the agreement between the film maker and the government broke down and the film maker left with some very unusual footage, to say the least. Is this possible? Is this believable? Was this flick secretly made in Hollywood? The ultimate Disney joke on all those film snobs?

More clandestine cinema veritie’ than documentary, this film within a film tells a funny story, indeed. Truth or fiction? You will have to see it and judge for yourself. 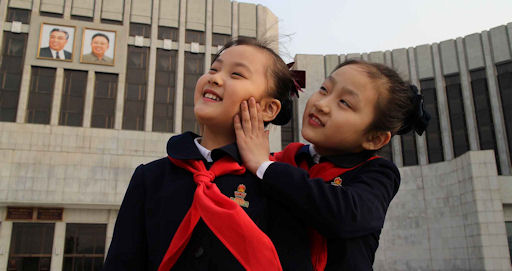