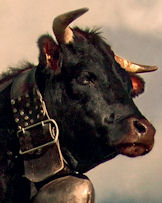 High in the Swiss Alps the Herens cows hike the steep terrain. The Herens is a prized, hardy alpine breed that roams freely in the warm season, though even in the snowy winter it is allowed out of the barn regularly to forage. But the Herens still differ in another distinctive way from other breeds. The females have an instinctual desire to fight.

Yearly contests are held. People gather. The horned cows are put in a ring where they paw the ground and charge each other. They don’t charge to hurt or maim but charge for dominance. Which cow will step back when they run at each other?

Vedette was a winner for several years in a row. Each victory assured her spot as the queen of her herd. Whether in a contrived ring or out on the steep alpine slopes, she marked her territory and charged at any other cow who came to graze near her plot. She chose the best space and grass and she led the herd between grazing spots. The human herders depended on her leadership.

Each year she had a calf and each year she was milked daily. Her proud owners loved and respected her. They assured the filmmakers they would let her die a natural death and that they would never eat her. But when she finally lost her drive to fight, they separated her from the herd. They said this was so she would not be disgraced by her loss in the herd hierarchy.

Claudine Bories and Patrice Chagnard, the filmmakers, are political. Don’t think for a moment that there aren’t layers of insight gleaned from the life of Vedette. First, the filmmakers are animal rights activists. Bories says, “We stand in a massive ecological crisis and it makes us reconsider the way we’ve been treating other creatures. We share our planet with the animals, yet we brutalize them. The capitalist society and mass consumption exploit them. And it makes us wonder: how and why have we come to establish that kind of relationship with other living beings?”

Chagnard adds that they are convinced that the way we treat animals says a lot about how we treat other people.

After Vedette is separated from the herd, Bories becomes one of the women who takes care of her. Vedette is gentle and receptive to affection and enthusiastically accepts being hand-fed. But are her owners, thinking they are removing her from the herd to save her the embarrassment of no longer being the queen, anthropomorphically attributing feelings that may not be true at a cost to Vedette’s instinctual desire to be with her herd?

Since writing the review on “Cow,” I’ve been re-thinking my own relationship to meat and dairy products. There is a Humane Certified Humane Raised and Handled certification that farmers can earn that assures an animal has been treated kindly. You might pay a little more for the milk but their calves are allowed to stay with their mothers for at least five weeks and no cow may ever be separated from others.

Even though Vedette appears to be humanized by her owners and Bories, the role of animals in the world and how they should be treated is what makes this film truly thought-provoking.